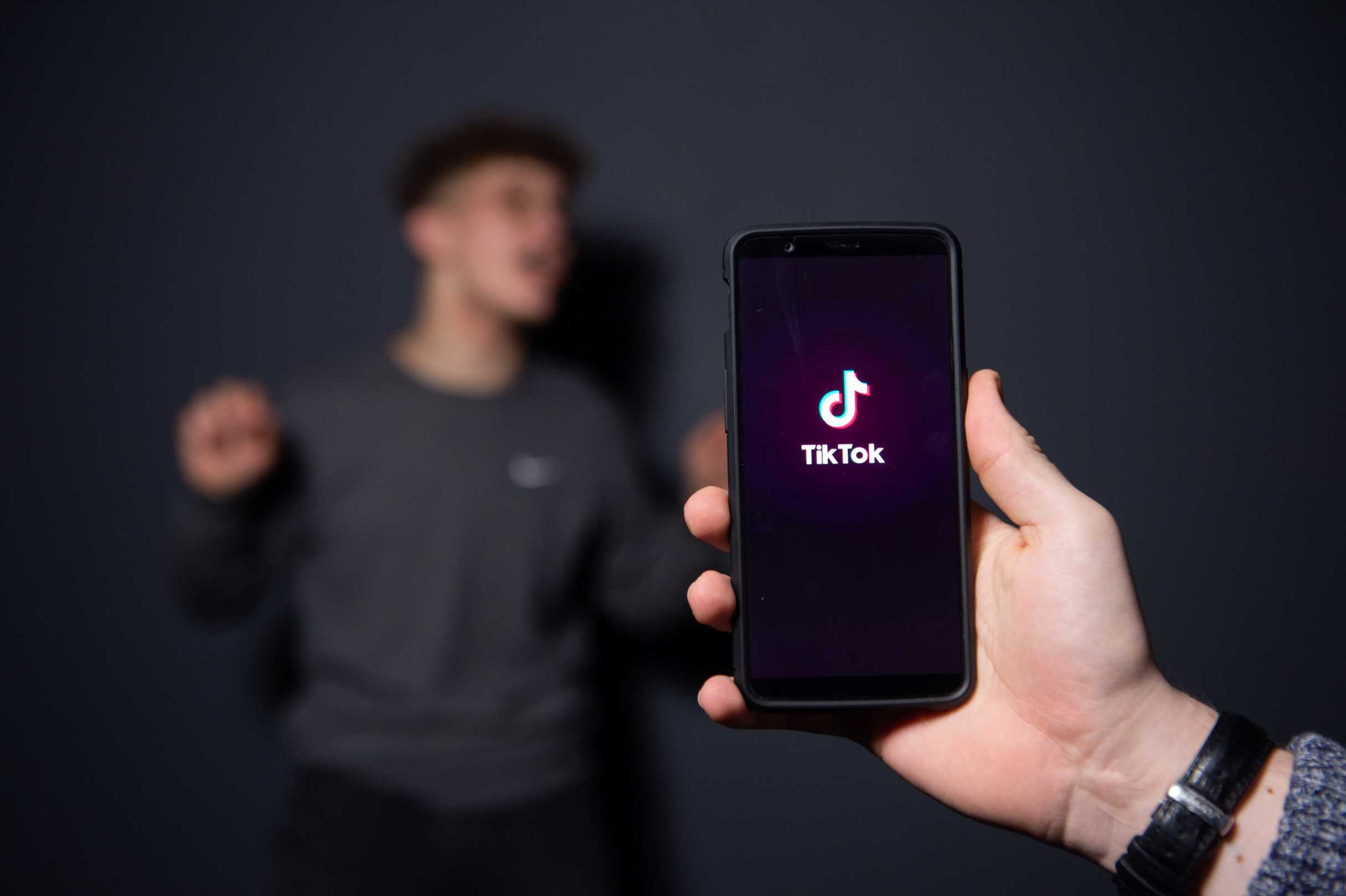 President Donald Trump and Secretary of State Mike Pompeo sent social media-obsessed teens into a tizzy when they said on Tuesday that the U.S. government is "looking at" potentially banning TikTok.

Then, amid growing scrutiny of the social video app, Amazon initially sent an email asking its employees to remove TikTok from their mobile devices because of unspecified "security risks," only for the e-commerce giant to change its mind later in the afternoon, CNBC reported. An Amazon spokesperson told CNBC the email to employees asking them to delete TikTok "was sent in error."

TikTok is extremely popular with Gen Z teens, many of whom are among the most popular content creators on the platform, where users share their own 15-second video clips featuring music and filters.The mobile video app, which is owned by Chinese parent company ByteDance, has been downloaded over 2 billion times around the world and it has as many as 80 million estimated U.S. users.

Pompeo told Fox News that the U.S. is "looking at" banning TikTok and other Chinese social media apps due to concerns over what the Chinese-owned platform does with its millions of users' personal information. President Trump then confirmed in a separate interview that the government is considering a potential TikTok ban.

The news sent TikTok users flooding to the platform to decry the potential ban, with a New York Times reporter noting that one post about the potential ban received thousands of comments within minutes.

Can the U.S. actually ban TikTok?

"As far as I know, the U.S. Government has never banned an app before," Jennifer Golbeck, a professor who specializes in data privacy at University of Maryland's College of Information Studies, tells CNBC Make It.

But it's definitely still a real possibility, Golbeck adds. "If they were to do this, I suspect it would be through new regulations that Apple and Google need to comply with in their app stores," she says.

For an idea of how that might work, Golbeck points to a similar situation that began last year, when the U.S. government added Chinese smartphone maker Huawei Technologies to a U.S. economic blacklist in May 2019. The government cited national security concerns in that case, in which U.S. officials have sought to block U.S. tech sales to Huawei while claiming the Chinese government could use Huawei's equipment to spy on the U.S.

In that case, the government implemented regulations to prevent U.S. companies from providing technology to Huawei and other Chinese companies on its blacklist. While the government has granted some waivers allowing certain U.S. companies to continue selling to Huawei, Golbeck points to the fact that Google blocked Huawei's access to its Android operating system as a result of the blacklisting.

In TikTok's case, Golbeck notes, it's easy to imagine similar actions by the U.S. government that would block companies like Google and Apple from allowing users to download the TikTok app in their app stores.

But what happens if a user already has the TikTok app downloaded on their mobile device? In India, which recently banned TikTok and dozens of other Chinese apps over security concerns, those apps have already reportedly been removed from app stores. And the Indian government said at the end of June that it ordered network operators in the country, like Vodafone, to block the app on their wired and wireless internet networks, effectively making it impossible for users to access TikTok even if they have already downloaded the app.

The government could also go after TikTok through the Committee on Foreign Investment in the United States (CFIUS), which reviews deals involving foreign buyers for national security concerns and was already investigating ByteDance's 2018 $1 billion acquisition of Musical.ly, a U.S. social media app that's been folded into TikTok. The Verge noted that CFIUS could force TikTok to restructure in order to create more of a separation between its U.S. business and its Chinese parent company.

Of course, since TikTok is one of the most popular apps on the market right now, there's bound to be some pushback should it be banned. Though TikTok has been download billions of times already, it was still the most downloaded app in May on both Apple and Google's app stores, according to estimates from market intelligence company SensorTower.

Beyond the outcry from TikTok's tens of millions of U.S. users, it's also likely that Apple and Google would be reluctant to ban such a popular app, which is exactly why it might take a legal requirement from the government in order to get them to do so, Golbeck adds.

Apple and Google did not immediately respond to CNBC Make It's requests for comment.

Why would the U.S. ban TikTok?

Talk of a potential TikTok ban stems from longstanding concerns that the social media company could be sharing U.S. users' personal information — such as their contact lists, email addresses and location data — with the company's Chinese owner, ByteDance, and potentially even the Chinese government.

ByteDance is one of China's fastest growing start-ups. The company was founded in 2012 (TikTok launched four years later) and is already reportedly valued at more than $75 billion.

In November, the U.S. government reportedly began investigating ByteDance's Musical.ly acquisition. That news followed calls from both Republican and Democrat lawmakers for the U.S. to investigate ByteDance and TikTok over national security concerns as well as censorship claims. (The company has banned users for criticizing the Chinese government on the app in the past.)

"We are taking this very seriously. We are certainly looking at it," Pompeo said about the potential TikTok ban in an interview this week.

Not surprisingly, Pompeo drew a parallel between TikTok and the government's actions against Huawei.

"Whether it was the problems of having Huawei technology in your infrastructure we've gone all over the world and we're making real progress getting that out," Pompeo told Fox News on Tuesday.

"With respect to Chinese apps on peoples' cellphones, the United States will get this one right too," he added. Pompeo has also said that Americans should only download the TikTok app "if you want your private information in the hands of the Chinese Communist Party."

"TikTok is led by an American CEO, with hundreds of employees and key leaders across safety, security, product, and public policy here in the U.S. We have no higher priority than promoting a safe and secure app experience for our users. We have never provided user data to the Chinese government, nor would we do so if asked," a TikTok spokesperson previously told CNBC in response to Pompeo's comments.

Meanwhile, TikTok has also maintained that all of its U.S. user data is stored in the United States, with the only backup in Singapore. The company claims that its data centers are located entirely outside of China, and that none of their users' data is subject to Chinese law.

Is a ban likely to happen?

"Under most circumstances, I'd say, 'No.'" Golbeck says when asked if she expects the U.S. government to actually move ahead with a ban of TikTok and other Chinese mobile apps.

However, she also pointed out that Trump and his administration have a habit of being surprisingly aggressive when it comes to taking economic actions against China. Blacklisting Huawei is one example, along with the administration placing tariffs on Chinese goods.

With that in mind, Golbeck says it also would not surprise her if the U.S. does end up banning TikTok.

"If I've learned anything in the past three years, it is that I'm bad at predicting what this administration is going to do," she tells CNBC Make It. "So I wouldn't be shocked if they tried to take a step toward [banning TikTok], though I do think it's unlikely."

"There are legitimate privacy concerns about TikTok, but I honestly don't see them as much more severe than the privacy concerns posed by hundreds of apps," Golbeck says. "Lots of apps collect contact data, record phone and audio data [and] track location … They share that information around with their partners, aggregate it, and analyze it. It's used in a lot of sketchy ways that most people wouldn't approve of."

As an example, she points to social networking giant Facebook, where millions of users had their personal data harvested by political research firm Cambridge Analytica without the users' consent ahead of the 2016 U.S. election. However, the U.S. government has no plans to ban Facebook, Golbeck says.

"Plenty of other companies collect and share our data in ways we don't know about and can't track," she says. "We don't see these calls about them either. Is the threat from the Chinese Government potentially having this data from TikTok that much greater? I'm not sure. It seems to me that they could get it from other sources if they wanted it."

In other words, while mobile apps like TikTok and others do present something of a cybersecurity threat, Golbeck is not convinced it's enough to spark enough of a concern over national security to necessitate banning the popular app.

"What is the threat of, frankly, a bunch of teenagers' data falling into the hands of the Chinese government?" she asks.

Of course, the platform is becoming more popular with other demographics. Celebrities, from Jennifer Lopez to 82-year-old actor Anthony Hopkins, have joined TikTok in recent months. Media outlets like The Washington Post and NBC News have also been ramping up their use of TikTok to share news stories and reach younger viewers (even CNBC International has a TikTok presence).

TikTok also launched "TikTok for Business" in June in an effort to attract more big brands to the platform, where those companies can create short video ad content aimed at TikTok's users. Major brands like Chipotle, Hewlett Packard and the NFL are among those that already have a presence on TikTok.

Update: This story has been updated to reflect that Amazon's earlier email to employees regarding TikTok was sent in error, according to an Amazon spokesperson.

Disclosure: NBCUniversal is the parent company of NBC and CNBC.