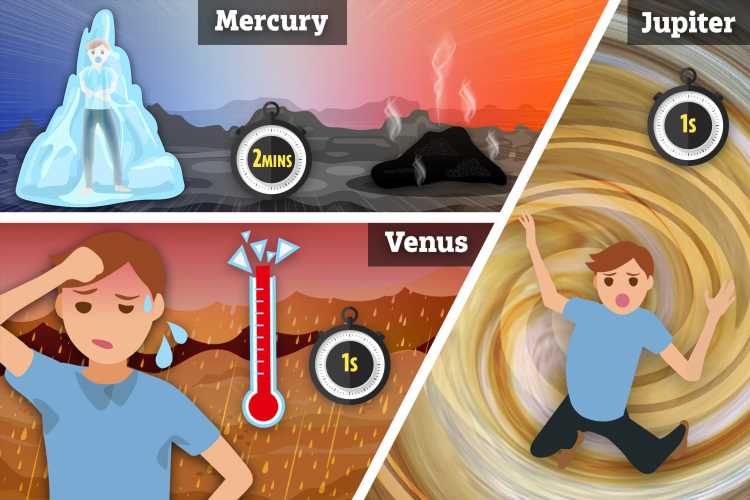 EVER wondered how long you'd survive on each planet in our Solar System?

We spoke to Dr Daniel Brown from Nottingham Trent University about how well an unprotected human might fair on different planets where a lack of oxygen would be the least of your worries. 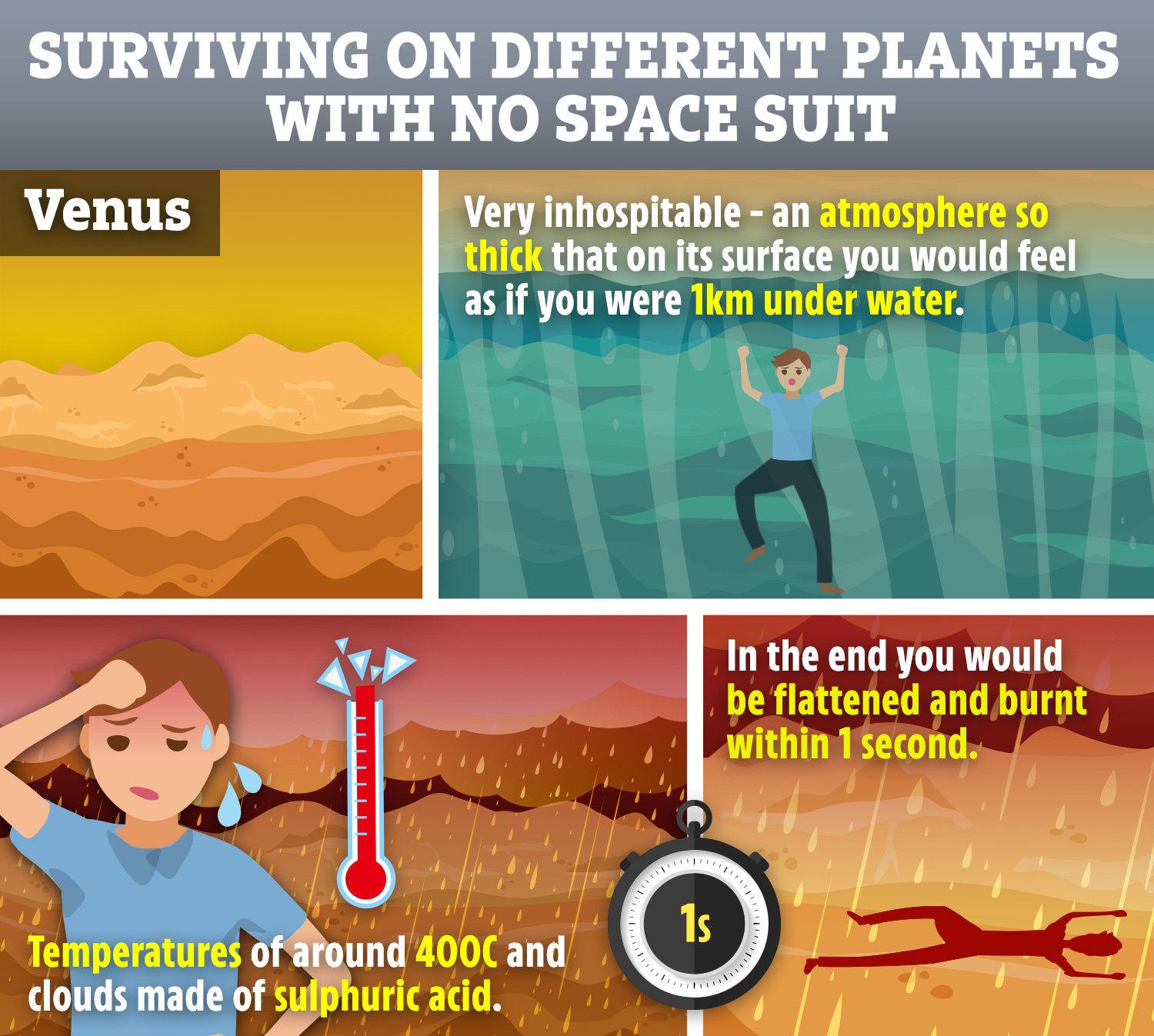 Venus is the second closest planet to the Sun but it's the hottest of all and extremely inhospitable.

Dr Brown explained: "It has an atmosphere so thick that on its surface you would feel as if you were 1km under water.

"It has temperatures of around 400C and clouds made of sulphuric acid. A good example of the greenhouse effect on overdrive.

"In the end you would be flattened and burnt within one second." 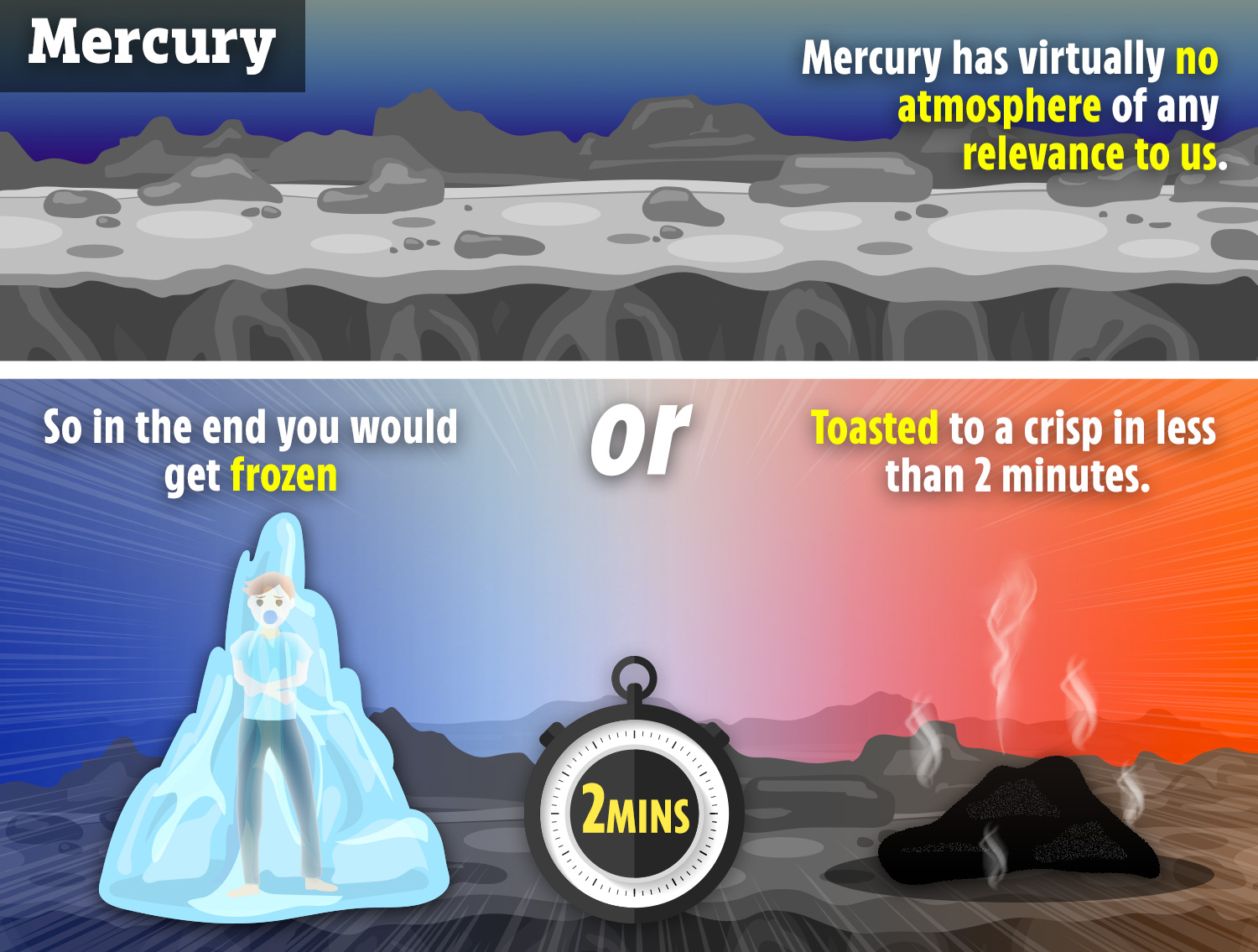 Mercury is the closest planet to the Sun and it's either absolutely freezing or boiling hot, depending on where it is in its orbital cycle.

"Mercury has virtually no atmosphere of any relevance to us.

"So in the end you would get frozen or toasted to a crisp in less than two minutes."

Next on the list is Earth, the third planet from the Sun.

Right now it's the only hospitable planet we're sure of and the worldwide lifespan is around 70-years-old.

Dr Brown said: "Our home with a perfect setup for us humans within its fragile ecosystem.

"We should usually survive on this planet for approximately 80 years.

"Mess with the ecosystem and climate and we might look at much different conditions, not that planet Earth would mind, just us."

Nasa and other space agencies have their sights set on putting humans on Mars in the near future.

Those astronauts won't be sent without top equipment and plenty of oxygen though.

In our scenario, a human with no protection on Mars wouldn't last very long.

Dr Brown said: "Many think its quite hot but in the summer months it might be just about the same conditions as in the dry valleys of Antarctica.

"But the bigger problem is a much thinner atmosphere, comparable to Earth’s atmosphere at 35km.

"Commercial planes fly no higher than 12km and the famous U-2 spy plane only reached 21km.

"So our body fluids would start to boil at our normal body temperature.

"Not good conditions at all and if you were lucky you would survive two minutes." 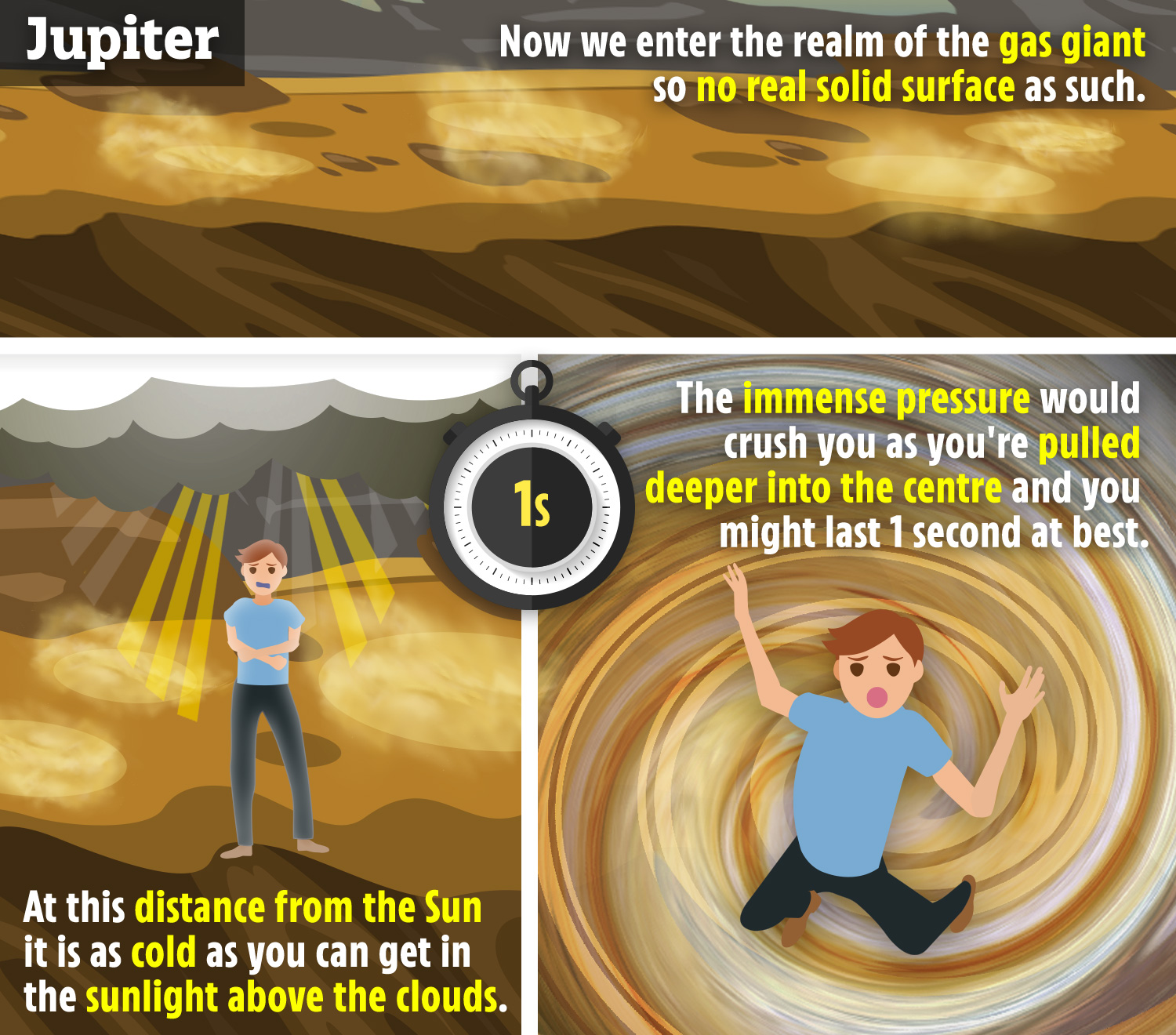 Jupiter is the largest planet in our Solar System and the fifth from the Sun.

It's know as a gas giant so wouldn't really have a surface for a human to stand on.

Dr Brown said: "Now we enter the realm of the gas giant so no real solid surface as such.

"At this distance from the Sun it is as cold as you can get in the sunlight above the clouds, but your problem lies in the atmosphere through which you will ever faster be pulled to the centre of the planet to be vaporised as you go deeper.

"But don’t worry about that, the immense pressure will crush you as you fall deeper and you might last one second at best."

Lastly, we have Saturn, Uranus and Neptune, where you'd be in for a similar experience.

Dr Brown said: "These are all gas giant with varying sizes but that doesn’t matter since you would all the same free fall to be crushed and vaporised inside these planets made out of atmosphere alone."

Of course, these are all hypothetical estimations of what could happen to a human if they randomly appeared on a different planets with their different compositions.

We won't know for sure what would happen to a human body on different planets until we have the technology to visit safely and that would mean being protected by lots of equipment and oxygen.

Even then, some planets sound like they'd be best avoided.

Here's some things you might not have known about our galaxy…

In other space news, an ex Nasa genius is selling the 'smell of space' in a perfume bottle.

A partial penumbral lunar eclipse is happening this weekend.

And, a massive star in a distant galaxy has baffled astronomers by disappearing without a trace.

What are your thoughts on these planet death scenarios? Let us know in the comments…