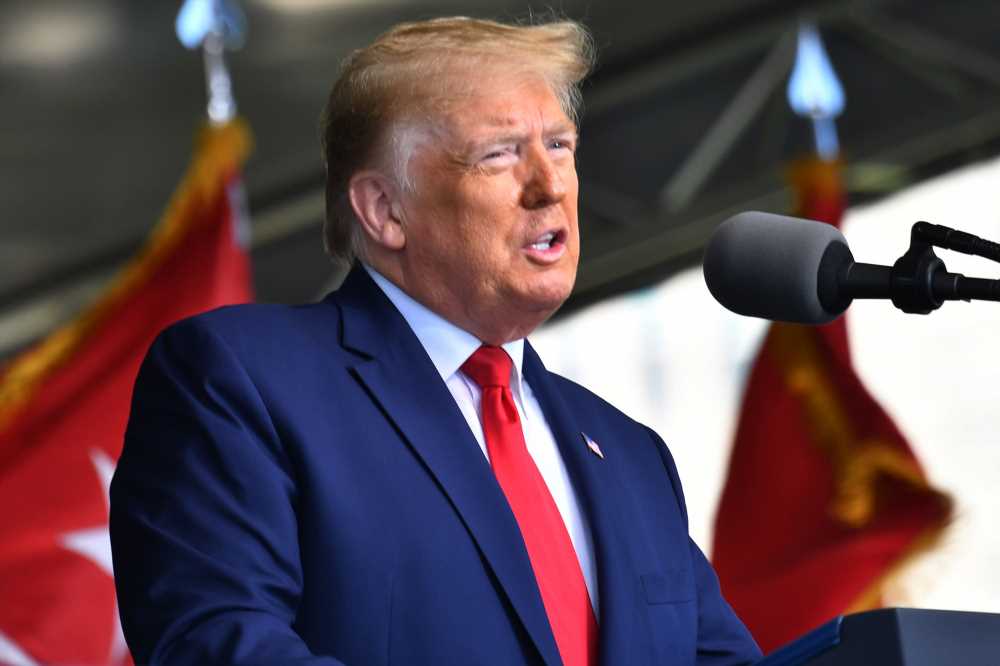 President Donald Trump on Tuesday highlighted he Veteran's Memorial Preservation and Recognition Act of 2003 and said he wanted "up to 10 years in prison" for anyone who vandalized or attempted to vandalize federal monuments dedicated to veterans.

Trump has a history of overblown threats and baseless promises on social media. But the law he referenced does make it a felony to vandalize or attempt to vandalize a monument that is dedicated to a person's service to the U.S. armed forces, as long as it's on federally owned property or if the person committing the vandalization crosses state lines to do so, legal experts tell PEOPLE.

In his Tuesday morning tweets, Trump said he had "authorized the Federal Government to arrest anyone who vandalizes or destroys any monument," though the law he referenced already empowers law enforcement to prosecute such a crime.

It was unclear if he was threatening to send federal agents to specifically police against the possibility of such vandalism at future protests. A White House spokesman did not comment further.

The president's statement on Twitter comes after protesters in Washington, D.C., on Monday appeared to attempt to tear down a statue of President Andrew Jackson in Lafayette Park near the White House.

Law enforcement reportedly stepped in to stop the statue from being torn down, according to the Associated Press.

Trump then tweeted early Tuesday morning: "I have authorized the Federal Government to arrest anyone who vandalizes or destroys any monument, statue or other such Federal property in the U.S. with up to 10 years in prison, per the Veteran’s Memorial Preservation Act, or such other laws that may be pertinent….."

In a follow-up, he added: "This action is taken effective immediately, but may also be used retroactively for destruction or vandalism already caused. There will be no exceptions!"

The president claimed to reporters outside the White House on Tuesday that he would sign an executive order "very shortly" in order to bolster the 2003 law he referred to on Twitter.

"All it’s going to do is reinforce what’s already there, but in a more uniform way," he said.

It remains unclear how an executive decree might change the existing legislation.

"The U.S. military as a general proposition is barred by statute from making law enforcement arrests unless and until some other statutory authority applies to give them that authority," Robert Chesney, a law professor at the University of Texas at Austin, explained to PEOPLE. "We don’t have that right now; famously, Trump toyed with invoking the Insurrection Act for this purposes, but then did not do so."

Trump previously threatened to invoke the Insurrection Act to send the military to states that had not quelled demonstrations to his liking in the wake of nationwide unrest sparked by the killing of George Floyd in Minneapolis on May 25.

Trump's statement on Tuesday drew backlash from those in favor of removing statues of controversial figures, such as Jackson, the seventh U.S. president. President Jackson was a slave owner and forced the removal of tens of thousands of Native Americans from the Southeastern United States, in what's known as the "Trail of Tears."

The 2003 law Trump referenced specifically protests memorials to veterans — not all statues or commemorations.

"The real trick is: Is the thing a memento of the person’s military service, or something else?" Chesney says. "Presidents who served in the military, but are not memorialized precisely for that reason, present a difficult case in that respect."

Chesney says the specific issue of Jackson's monument in Lafayette Park, for example, is "not a hard call" given that it's "a memorial to his role in the Battle of New Orleans, and thus clearly covered."

Trump has regularly spoken out about the removal and vandalization of monuments during the Floyd protests.

He called the idea of removing a statue dedicated to Theodore Roosevelt outside the American Museum of Natural History in New York City "ridiculous" and tweeted, "don't do it!"

The statue shows the Roosevelt on horseback with a Native American man and an African man trailing behind him on either side. Ellen V. Futter, the museum’s president, told The New York Times that the statue's "hierarchical composition" is why they plan to remove it, while still recognizing the former president as a "pioneering conservationist."

“Over the last few weeks, our museum community has been profoundly moved by the ever-widening movement for racial justice that has emerged after the killing of George Floyd,” Futter told the Times. “We have watched as the attention of the world and the country has increasingly turned to statues as powerful and hurtful symbols of systemic racism.”

“Simply put, the time has come to move it," Futter said.