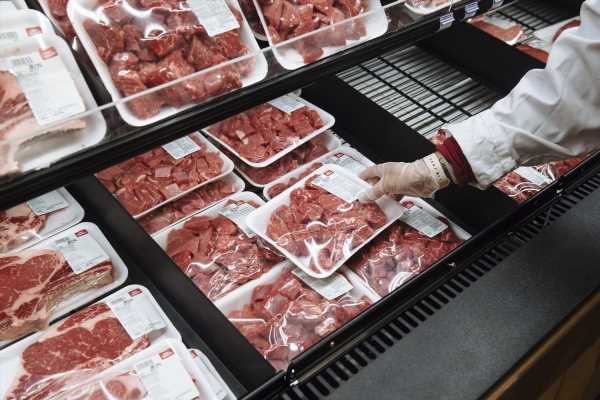 The squeeze on U.S. meat is easing. Wholesale prices are falling as slaughterhouses recover from Covid-19 related shutdowns and traders brace for lower demand than usual over the Memorial Day holiday.

Enough workers returned to American slaughterhouses that pork and beef plants through Wednesday were operating at 85% and 81%, respectively, of year-ago levels. That’s a rebound from late in April, when production of each meat fell by more than 30%.

While the uptick means more product will be available to grocers, the pandemic remains an issue for the unofficial start of summer grilling season with limitations on group gatherings still intact.

“It’s prime time for grilling and social events and you’re not seeing the meat features that you typically do,” Don Roose, president of U.S. Commodities in Iowa, said by phone. “So it’s disappointing from a demand standpoint.”

Wholesale beef prices have declined six straight days, dropping 15% from a record of $475.39, the biggest such drop since 2011, U.S. Department of Agriculture data showed Wednesday.

Thousands of meat-plant workers caught Covid-19, prompting many of the biggest U.S. meat plants to close. Due to still-ill workers and absenteeism, it will likely be weeks or months before the plants can reach full capacity.

Slaughter rates in Canada, meanwhile, are also increasing from their lowest levels in four decades after Cargill Inc. reopened its beef plant in High River, Alberta, in the first week of May.

The plant, which accounts for about 40% of the nation’s beef processing capacity, closed for two weeks after a coronavirus outbreak infected nearly half of the facility’s 2,000 workers, one of the largest hotspots in North America.

In Canada, just under 40,000 head were slaughtered in the week ended May 9, up from 24,000 the previous week, which was the lowest since at least 1973, according to data from Canfax, the market analysis division of the Canadian Cattlemen’s Association.

Meat packers “seem to be picking up their pace fairly aggressively” and cattle waiting to be slaughtered are backing up at a slower rates, said Brian Perillat, senior analyst at Canfax.

— With assistance by Patrick McKiernan