Former Bessemer investor Sunil Nagaraj was in the middle of making a presentation when he started receiving a flood of messages.

“I finished my presentation, glanced at my email, and I saw a bunch of congrats emails. My heart skipped a beat — I said, ‘Oh my God, what happened?” Nagaraj told Insider. “I looked at the news and my jaw hit the ground.”

On Wednesday, identity management firm Okta announced plans to buy cybersecurity startup Auth0 for $6.5 billion in stock — which represented a whopping 240x return on the seed investment that Bessemer Venture Partners made in 2014 when Nagaraj was an investor there (he left in 2017 to found his own firm, called Ubiquity Ventures).

All in, Bessemer invested just under $95 million into Auth0 which translated to a payoff of more than $1 billion.

“This is the first time in my career I’ve seen such great validation of entrepreneurs’ hard work — and then just my own decision-making as a VC from seven years ago,” said Nagaraj.

Auth0 was founded in 2013 and has raised over $330 million in funding according to PitchBook, most recently at a $1.92 billion valuation.

Nagaraj first learned about Auth0 at the tech and culture festival South by Southwest in 2014. A Bessemer VC at the time, he was scouting startups focused on developers tools and security, and a fellow partygoer’s description of Auth0 “struck a nerve.” The firm was in a sweet spot between those two interests: It makes secure authentication tools that developers can quickly and easily incorporate into their websites or applications.

A few months later, Nagaraj and fellow Bessemer partner David Cowan met with the firm and both saw cofounders Eugenio Pace and Matias Woloski as tenacious technologists who were passionate about their product and the customer experience. Nagaraj recalls how they bonded by ditching the pitch deck diagrams to dive into the technical details. 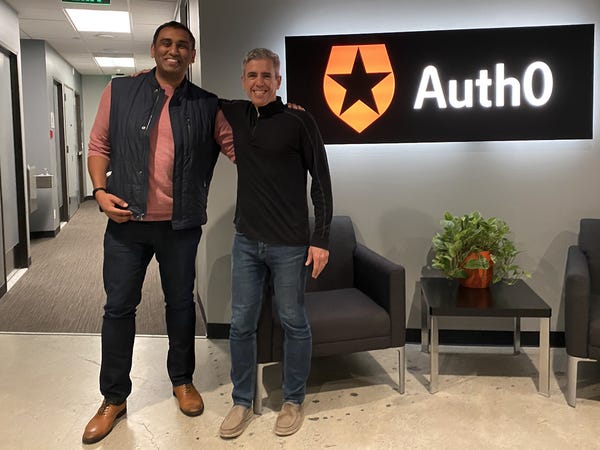 “I remember it so clearly, even though it was seven years ago: Their shoulders dropped, their eyes lit up, and all of a sudden it was like, ‘Oh, he’s one of us,'” he said. “That moment is magical.”

At the time, Auth0 already had 75 customers and was generating $10,000 in monthly recurring revenue. It had just closed its seed round, netting around $850,000 from friends, family, and small funds, but Bessemer wanted in.

Nagaraj said the investors’ technical understanding of the space “convinced [Auth0] to take our money.” The firm invested $1 million in that seed round — and participated in its Series A, B, C, D, E, and F to ultimately hold a roughly 20% stake in the company. With the $6.5 billion sale price, that stake turned into roughly $1.3 billion.

That’s a great start to 2021 for Bessemer, which has several large IPOs in its pipeline. Two Bessemer-backed space companies also announced SPAC mergers this week.

The occasion of Auth0’s exit had the Bessemer team reflecting back on a a 2014 memo written by the firm, where the team estimated that there was a 1% “home run” scenario in which Auth0 would have a $1 billion exit. Okta’s purchase achieves that home run and more — but Cowan admits that he and other self-described “greedy venture capitalists” tried to convince Pace and the management team to try to go public instead of selling, because they believed it would net even greater returns.

Ultimately, though, the fit between Okta and Auth0 made sense, since together their products could provide an even better customer experience if they worked together. Okta’s market cap is roughly $28 billion, though its stock price has sunk more than 10% since the announcement.

“The two companies have been helping businesses with identity in different ways and they’ve often sort of fantasized about what they could do together,” Cowan said. “And as Auth0 was approaching an IPO, I think they both realized that it was now or never and so the two of them thought, ‘You know what, let’s do it.'” 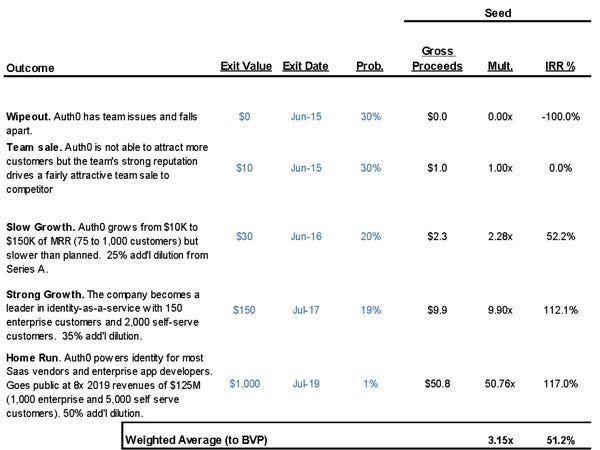 Nagaraj’s advice for anyone hoping to invest in the next Auth0 is to “get their hands dirty” by using the product and testing it out in the same way customers would. Understanding how Auth0 was going to make the lives of developers easier was integral to Bessemer’s investment.

Similarly, Cowan said that investors should have a clear idea of what kind of technology they’re looking for — and then try to find the strongest group of people working on that problem.

“If you can map out in advance what you’re looking for,” he said, “Then it will really help you narrow down the opportunities and you could just focus on the team.”