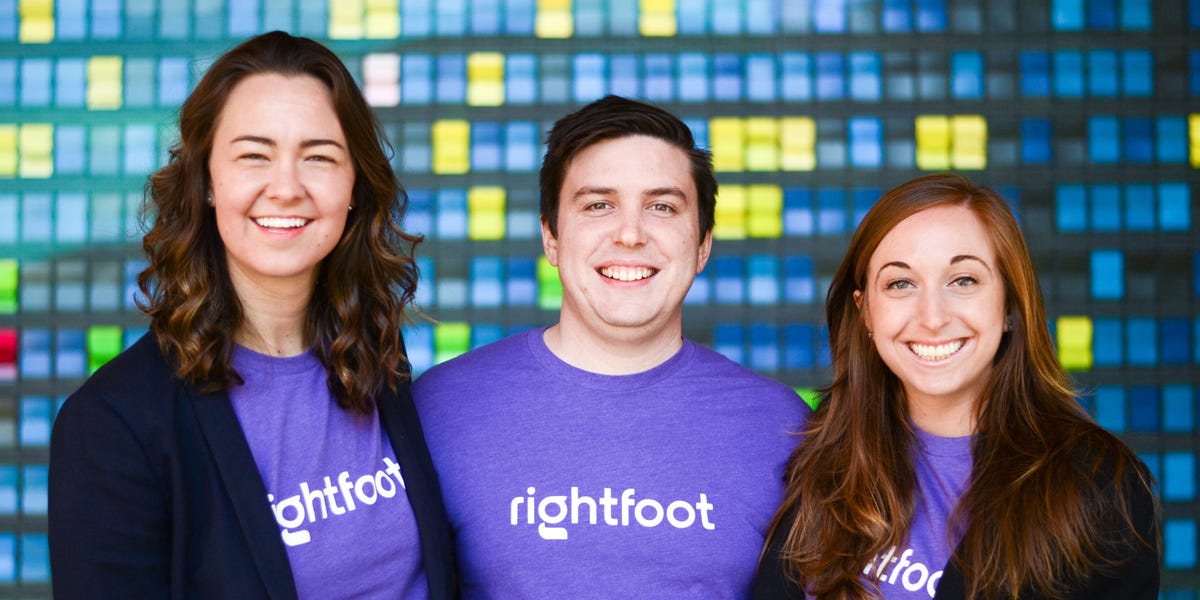 Danielle Pensack and Deirdre Clute met in grad school. Both having taken on student loans to attend the Stanford Graduate School of Business, they, like many entrepreneurs, set out to fix their own problem.

A classmate and early angel investor introduced them to Will Schmitt, a former software engineer at Google, to weigh in on the technical elements. In the summer of 2018, the trio started workshopping ideas on ways to simplify student loan repayment.

In 2019, they cofounded Rightfoot, a fintech offering a way for employers to help employees pay off their student loans.

As they were building out their HR-focused debt repayment system, the cofounders realized how complex and fragmented the student-loan market is, which led them to pivot to a broader play, focused on cleaning up the backend of the process.

Rightfoot is now building the application programming interface (API) layer of debt repayment that can link to the entire market of student-loan servicers. Analogous to the way Plaid helps third-party apps link into various banks’ account data, Rightfoot wants to help fintechs, payroll companies, and other consumer apps effortlessly plug into its API to repay debt.

On Wednesday, the startup announced a $5 million seed round led by Bain Capital Ventures, with participation from BoxGroup and SemperVirens Venture Capital.

“The idea of their point solution resonated,” Sarah Smith, partner at Bain Capital Ventures, told Insider. “That said, we got even more excited as a firm when we saw the shift to being more of an infrastructure play in enabling many people to build point solutions.”

“There aren’t payment rails that focus on debt payments,” Clute said. Many student-loan servicers still rely on processing paper checks by hand. That antiquated infrastructure is the problem Rightfoot has set out to solve.

“It’s a huge problem in the US, and now we’re finally able to provide a solution so that developers can create really incredible products around it,” Clute said.

Albeit complex, Rightfoot is putting in the legwork today that will make it easy for any company to add debt repayment to its offerings.

Rightfoot has seen traction among benefits companies in part due to the recent five-year extension of federal legislation allowing employers to offer student-loan repayment as a pre-tax benefit, similar to 401k matching.

The third category Rightfoot is eyeing is broader.

“Any time there’s money flowing through the veins of an application or any sort of digital wallet, you have the opportunity of having a user send a portion of those funds directly to their student loan,” Pensack said.

An app like Venmo or a website like Patreon, for example, could integrate with Rightfoot’s API to enable users to send payments for other users’ student loans, Pensack added.

At $1.7 trillion in the US, student loans are a massive market. But Rightfoot has its sights set on other kinds of debt, too.

“We’ve started with student debt, but are soon expanding into cover credit cards, auto loans, and all of the other areas where it’s equally as fragmented as it is for student debt,” Pensack said.

Rightfoot’s round included a diversity rider

Rightfoot’s round was oversubscribed, and its founders took their time choosing the right investors. In addition to larger VC firms, there are also several angel investors on board including Emily Chiu, managing principal of Cash App, and Louis Beryl, founder of student-loan refinancing platform Earnest, and Plaid cofounder William Hockney.

“They were incredibly thoughtful about their cap table,” Smith said.

There was a diversity rider included in their term sheets, ensuring investors’ approach to diversity were aligned with their own.

“We went with the investors that were truly the greatest add,” Pensack said.” None of this was filling quotas on our cap table.”

And Rightfoot’s cofounders are hopeful that more founders will engage investors in conversations around diversity and inclusion.

“To other founders, we’d say, when you’re going up for a fundraising to have these conversations, see how people react,” Pensack. “It’s very clear and obvious who has thought about this and is actually making intentions to be better and more inclusive.”