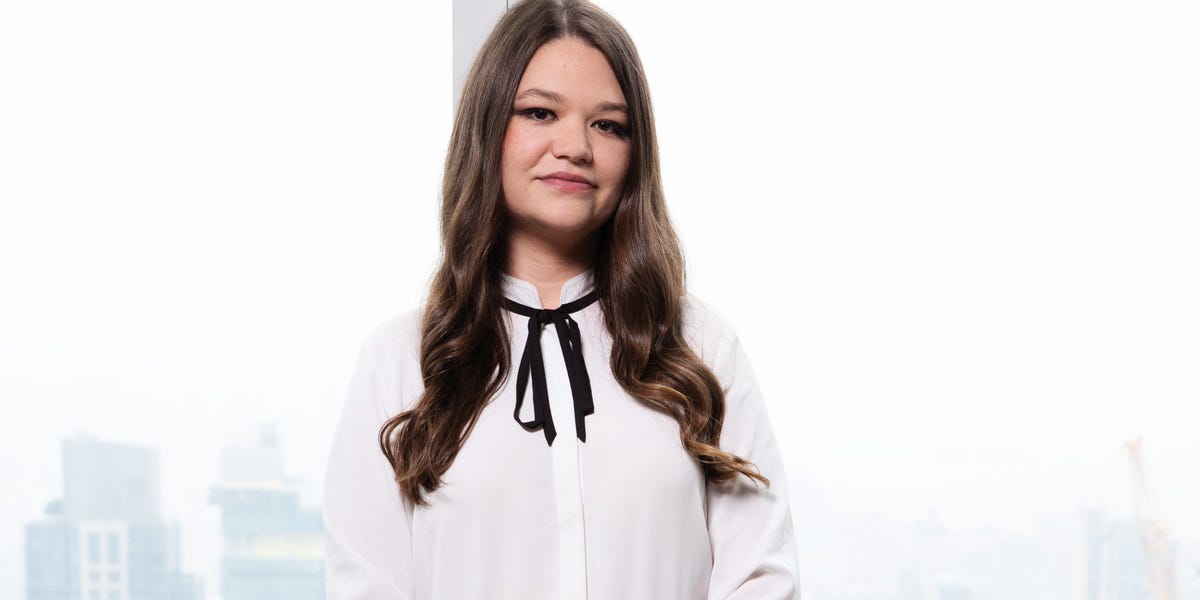 Brittany Kaiser has been warning about online disinformation and polarization for years.

In 2018, Kaiser, a former senior director at Cambridge Analytica, sounded the alarm on the data firm's ties to Facebook, revealing the company had accessed over 87 million Facebook users' data without their knowledge or permission and used it to target people on behalf of the Trump 2016 campaign and Brexit movement in the UK. More recently, she served as the campaign manager for Brock Pierce, a child star who ran for president as an independent in 2020 and is a former business partner of Steve Bannon, Donald Trump's former chief strategist.

Kaiser, 33, is now a data rights activist and cryptocurrency lobbyist. She runs Own Your Data Foundation, a charity she founded that teaches digital intelligence courses, and founded the Digital Asset Trade Association, a cryptocurrency advocacy and lobbying group. She advises nine different companies, mainly blockchain or encryption companies working on digital identity, data management, and data ownership and monetization. She also creates curriculums for high schools, works with the DQ Institute to issue new digital literacy education geared toward eight- to 12-year-olds, and does one-on-one tutoring.

She wants people to know "there are other options than selling your data to Mark Zuckerberg for free on WhatsApp," she said, adding that there needs to be protocols that pay users for their data.

Kaiser talked with Insider about the fight for data rights legislation, where she sees Big Tech in light of Biden taking office, and what she's working on now.

At 19, Kaiser worked alongside Facebook cofounder Chris Hughes on Barack Obama's 2008 presidential campaign as part of the new media team, which did data-driven messaging and direct voter contact.

"It's here where we started doing basic data science on social media," Kaiser said. The tiny team was collecting data on people's locations, the issues they felt to be important, the events they liked to go to, and so on, in order to create a profile that could be marketed to.

Noting that this data collection has only gotten more pervasive, she predicted 2021 will see more lawsuits filed against Big Tech, with increased punitive measures to those that incite harm online.

"I really think criminal liability for data abuse is one of the most important reforms that we need to make in our legal system," Kaiser said. "Civil fines haven't worked in Europe or the United States."

The lack of technologists currently in office is a real problem, Kaiser noted.

"Most people that are technical have a job in technology, they don't go into government," Kaiser said. "The ratio needs to change."

Kaiser thinks 2021 will be "much brighter" since the Democrats won control of the Senate, she said, because "bills in federal congress relating to data protection have been more heavily endorsed by Democrats."

"It's objective for anyone to see that data protection has been championed more by Democrats, and unfortunately fought by Republicans in Congress for political purposes," Kaiser said, adding she's hopeful that because of new Democratic leadership, the next year will see at least one law related to data protection, if not a whole package of legislation, passed federally. She also hopes to enforce data rights as property rights.

Kaiser also said she thinks there will be a more serious movement on antitrust enforcement and the reformation of Section 230, which currently protects social media companies from being regulated as publishers of third-party content.

Now that incitement of violence online has been directly linked to physical violence and other crimes since the January 6 incident at the US Capitol, Kaiser said we're likely to go one of two ways:

"Either platforms will have to bear the burden of liability for managing the content published by their users, or individuals could be identity-checked to hold accounts where they can post public content, even if they retain a public avatar or pseudonym, meaning the platform will know their identity for liability purposes," Kaiser said.

When asked if a global digital charter could be effective in governing online activity, Kaiser said there's hope but no foreseeable action just yet. She suggested the best way to achieve a global digital charter would be through the technology itself, not the law. However, because global agreements "usually have plenty of countries that either have reservations or just don't sign on," she said, "we need agreements that we can all adhere to, but that's idealistic given the amount of countries I don't think will ever give data rights to anyone."

Another concern of hers is holding companies criminally libel for their negligence with data breaches. Kaiser said she's a "big fan" of the Corporate Executive Accountability Act that was introduced into Congress in April 2019, although it was never passed. She also supports very technical laws like banning algorithmic amplification, where more hateful or provocative posts get bumped up for greater engagement, as proposed by Democratic Senator Mark Warner of Virginia.

"It's about preventative measures," she said. "If an executive thinks they can go to jail if they don't take these laws seriously, guess what, they're actually going to take them seriously."

"Sure, the FTC fined Facebook $5 billion for violating consumers' privacy rights, but Facebook made that back the same day off how much press they got," Kaiser added. "And in the UK, Facebook was charged 500,000 pounds for destroying democracy during the Brexit campaign. 500,000 pounds is the cost of the UK leaving Europe? Come on."

Kaiser helped draft the New York Senate bill on coronavirus contact tracing data protection. She campaigned for Prop 24, The California Consumer Privacy Rights Act (CCPA), which now gives the state of California stronger online privacy rights, including the right for citizens to see what information is collected on them as well as the right to request that data be deleted.

Kaiser is a big proponent of decentralized apps and services, and suggested using Brave's browser instead of Google because it pays users to use it. For email, she said to use Protonmail, and for messaging Signal — both rely on encrypted and open-source protocols. As for social media, she recommended Voice, which also does identity checks and gives users cryptocurrency for watching ads (Kaiser is an advisor for Voice).

"There are no bots or trolls on Voice because they screen. It's the most incredible user experience where I don't have anyone saying something mental," Kaiser said about the new social media platform.

And for those wanting to exercise their data rights and reign in control, Kaiser said the Revoke app, a company she advises, allows consumers to retrieve their data, delete their data, and revoke access for marketing purposes, among other functions.

Kaiser has been following new social media platforms like Parler, which is funded by conservative donor Rebekah Mercer. Kaiser sees similarities between Parler and the workings at Cambridge Analytica and worries about the platform's claims.

"Parler says it is protecting your privacy, so yeah, that might mean they are not selling the data to external companies, but what are they doing with the data internally? What types of messages are you seeing? What's being amplified?" she said.

She's also currently working on new laws to regulate the data collected on vaccines and immunity, which she said, "could, and likely will, be used for society to return to public life."

But her biggest call to action?

"The way forward is pushing forth ethical companies that give data rights to people. It's important to get these platforms more funding and users so they can scale," Kaiser said.