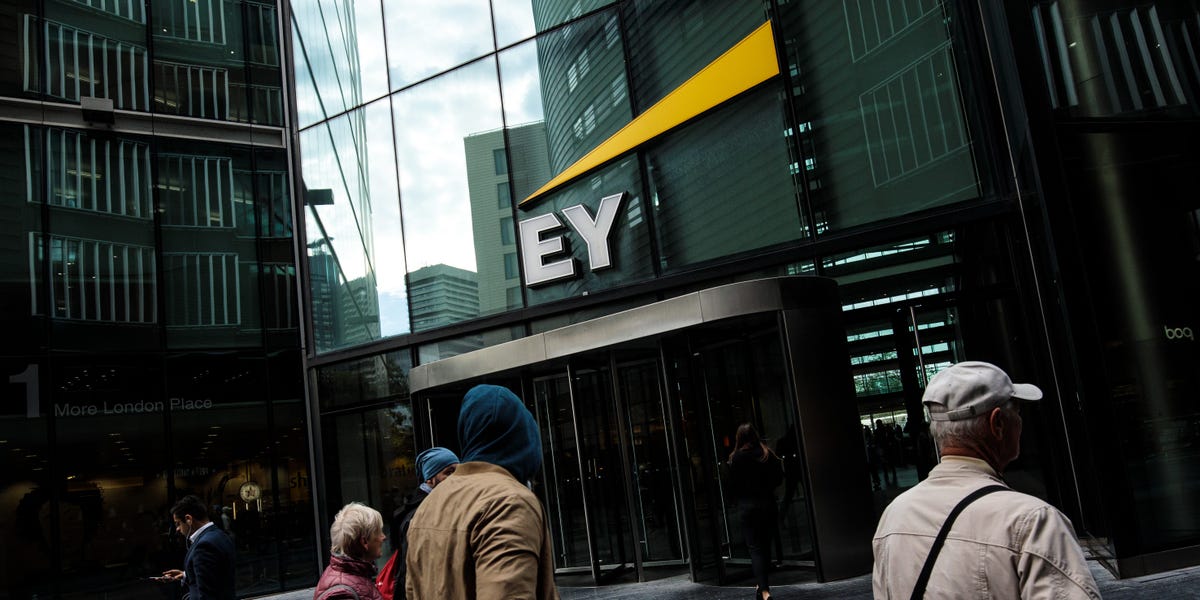 The London-headquartered firm achieved its goal of becoming carbon neutral in 2020, but after reviewing the science and talking to the company's climate change experts, it became clear that being carbon neutral wasn't enough.

Steve Varley, EY's chief sustainability officer who was appointed in July 2020, told Insider the company emitted 1.1 million tonnes of carbon dioxide in 2019. The travel restrictions brought on by the coronavirus crisis has meant these emissions have fallen to 769,ooo tonnes, but Varley said EY's commitment is "regardless" of the impact of the pandemic.

"Our commitment is to remove more carbon dioxide from the atmosphere than we emit every year, forever," he said.

Varley said he was inspired by Microsoft becoming carbon negative in January 2020. "That's been on our minds and part of the inspiration for EY also declaring that we become carbon negative."

"Wouldn't it be fantastic if society recognized that business is a positive driver rather than a negative contributor" to the environment, he said.

Here are the seven ways in which EY plan to become carbon negative this year.

Cut down on business travel emissions

EY's first commitment is to reduce travel emissions produced by the business by 35% by 2025. That includes employees or clients travelling by plane, train or bus.

Of the 1.1 million tonnes of carbon emitted by EY in the financial year of 2019, three quarters (76%) of those emissions came from air travel. Since the pandemic struck in March, this amount has reduced as less people are travelling.

While the pandemic won't last forever, Varley said EY expects employees to continue to use technology such as Zoom to communicate which will ultimately reduce the need to travel. The company is also investing in collaboration technologies to help achieve this goal, he said. Many EY clients have made similar commitments to reduce their carbon emissions, Varley said, who believes there will be teamwork between both parties to make sure they cut down together.

Another commitment EY has made is lowering the electricity usage in its offices and procuring 100% renewable energy for the remaining needs of the company. This will help EY become a member of the RE100, a group of organizations worldwide committed to renewable electricity, by 2025, the company said.

Given that coronavirus has forced many employees to work from home, this may seem quite easy to reduce. But Varley said the commitment includes calculating how much carbon EY employees, like himself, are emitting from home working.

"The future we see is a mixed economy of working," said Varley, who said staff and clients have been working in a range of places including home, offices, and client's sites.

EY also want to sign more contracts with electricity suppliers so any electricity they don't use can go straight back into the national grid.

Provide employees with tools that calculate how much carbon they're emitting

In order for employees to take matters into their own hands, EY are providing them with a modelling tool which will work out how much carbon they're emitting whilst working.

The tool will work similar to another tool that EY uses to calculate the financial budget on a project, according to Varley. It will show you how you can achieve the same result but with a lower footprint, he said.

Plant trees and use technologies to remove carbon from the atmosphere

One of the projects EY has invested in as part of its strategy to cut down on carbon is helping to protect five million trees in the Amazonia rainforest through an organization called South Pole.

EY plans to use more nature-based solutions and carbon-reducing technologies to offset more carbon than it emits every year.

Invest in services to help EY clients decarbonize their company

Varley said EY is accelerating its investment in the company's Climate Change and Sustainability Service (CCASS) practice, which helps clients and companies identify and understand how to be more sustainable.

The accounting firm is also planning to invest in its tax practice, Varley said, as it's increasingly likely that many countries will introduce or strengthen carbon taxes.

EY is also part of the "Terra Carta" – a charter unveiled by His Royal Highness The Prince of Wales on January 10, which gives businesses a roadmap to a more sustainable future.

EY will require 75% of its suppliers to set science-based targets, which help businesses reduce emissions in line with the Paris Agreement goals, by no later than 2025. Having a science-based target means that companies will reduce their emissions at a quicker pace to make sure they're not warming the planet up, according to Varley.

"I wouldn't be surprised that in subsequent years we don't increase that 75% to 100%," Varley said. "We realise that we have a role to play systemically because we're a big global organisation of making sure our supplier also live our values and don't contribute to the warming of the planet."

Not enough [companies] have gone carbon negative in their announcement, according to Varley. "There's an opportunity to get a science-based target, to become net zero and to remove more carbon from the atmosphere than they emit."