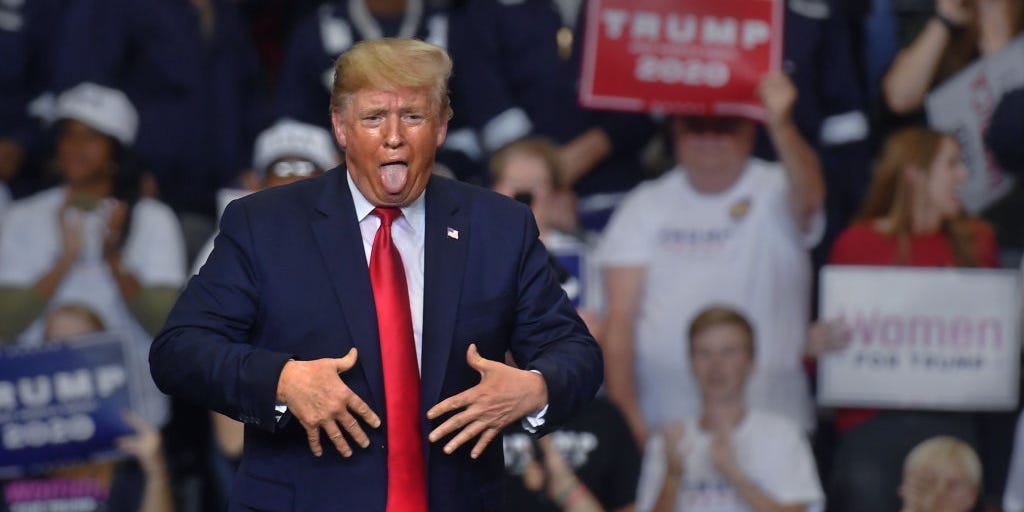 The attack on the Capitol made so many of the ugliest parts of Donald Trump obvious even to people who pretended they didn't exist. Of all of these personality "flaws" — as his former White House chief of staff John Kelly's said in an interview — the one most likely to elicit schadenfreude is Trump's clear contempt for his own supporters.

Perhaps you've seen this video from the rally before the violence on Wednesday. Trump and his entourage watch the crowd as they wait for the president's speech while blasting the song "Gloria" — Donald Trump Jr. narrates, preening ecstatically. According to the Washington Post, this moment of triumph was bittersweet for Trump. While the always-camera-conscious president said he enjoyed the masses assembled to hear him talk, he was dismayed that his supporters in their costumes looked "low class." This was no Brooks Brothers riot.

In a short speech the day after the terrorist attack on the Capitol, Trump did not apologize for inciting these individuals to insurrection. That would mean that he would actually have to take some responsibility. He did, however, sacrifice his loyal supporters to America's anger, disavowing them and saying that they would be punished to the fullest extent of the law for their crimes.

Meanwhile, Trump's lackeys in the media and in Washington tried to convince Americans that the attack was actually staged by antifa members disguised in MAGA hats and animal pelts, despite the FBI declaring that antifa wasn't involved.

Trump only cares for his followers insofar as they adore him keep him rich, and do his bidding. Otherwise, he wouldn't even bother to look at them while driving by in his limo. Most of them could never join Mar a Lago, or become regulars at one of Trump's golf clubs. You won't find most of these people having dinner at the now-shuttered 21 Club or being seated at black tie charity functions.

When he tells them he "loves them" and that "they're special" like he did in a video following the insurrection, he's just manipulating them. What's more telling is what Trump does and says to his supporters when he's under duress. According to reports, once Trump realized he could face legal consequences for inciting them to violence he denounced them.

Trump has always been a fake populist and a fake patriot

Like so much of Trump's behavior this contempt for his own is hardly shocking. Even though he raged against plutocrats during his political life, he's never wanted anything more than to be one. In 2016 he ran for president to bolster his brand and to raise some money, not to actually do the work of the presidency. In an interview with MSNBC on Saturday Trump's former personal lawyer Michael Cohen said it was supposed to be "the greatest infomercial of all time."

"Donald Trump doesn't care about anyone but himself," Cohen said emphatically in the interview. "Maybe if we say that enough his supporters will understand that Trump is setting them up like he sets me up."

If you don't believe Cohen, and Trump hasn't made this obvious enough for you, his former campaign CEO and adviser Steve Bannon gave the game away entirely. He referred to Trump's supporters as "hobbits," and he did not enjoy spending time among them. In 2019 documentary "The Brink" he addressed a group of Trump supporters in a modest living room, assailing the virtues of middle class nationalists around the world. After he got into a chauffeured car to board a private plane home, Bannon's associate snickered: "You couldn't pay me a million dollars a year to live in that house." Bannon catches himself before joining the chorus.

Trump always wanted Wall Street titans to respect him, billionaires like Nelson Peltz and Carl Icahn. And for one brief shining moment in his life when he was in the White House, they did. Thanks to his incitement of violence on the Capitol, though, that's over now. Some of these billionaires are denouncing him, just as Trump denounced his disposable followers. Instead of being a laughing stock on the Upper East Side like he was before he was president, now he will be a leper.

I'm not arguing that the people rushing the Capitol were crippled with "economic anxiety" (one conservative radio host arrived by private jet). And I'm sure we'll come to find that a few were fairly well off. The reality is that plenty of Trump's virulent supporters are people motivated not by poverty, but by racism and paranoia fed on diet of lies spewed on right-wing media. Some of these people are living very comfortably. The thing is, Trump never wanted to be comfortable or even well off. Trump has always wanted to be oligarch rich.

And he's always thought his family deserved the same stature as America's most rarefied elite. While his gauche manners and grotesque personal history made that impossible for himself before he was president, it's clear Ivanka was trying to give the family name some kind of regal sheen. Instead of hanging out with people her own age, she and Jared were known to have preferred to keep company with the likes of Rupert Murdoch, Wendi Deng and David Geffen. They wanted to run exclusively with the kind of people who create trusts for their children and get their names plastered on buildings.

The Trump Organization has also tried to market itself as catering to the glamourous and elite as well. There was a brief moment back in 2017 when the company was going to try to launch a chain of three star hotels called American Idea. They would be located in the Southeast of the US, and cater toward the middle-class supporters Trump purported to love. The Idea idea was scrapped in 2019.

Trump would've hated the guests anyway. His supporters were (and still are) marks. And no grifter as accomplished at Donald Trump ever has any respect for a mark.