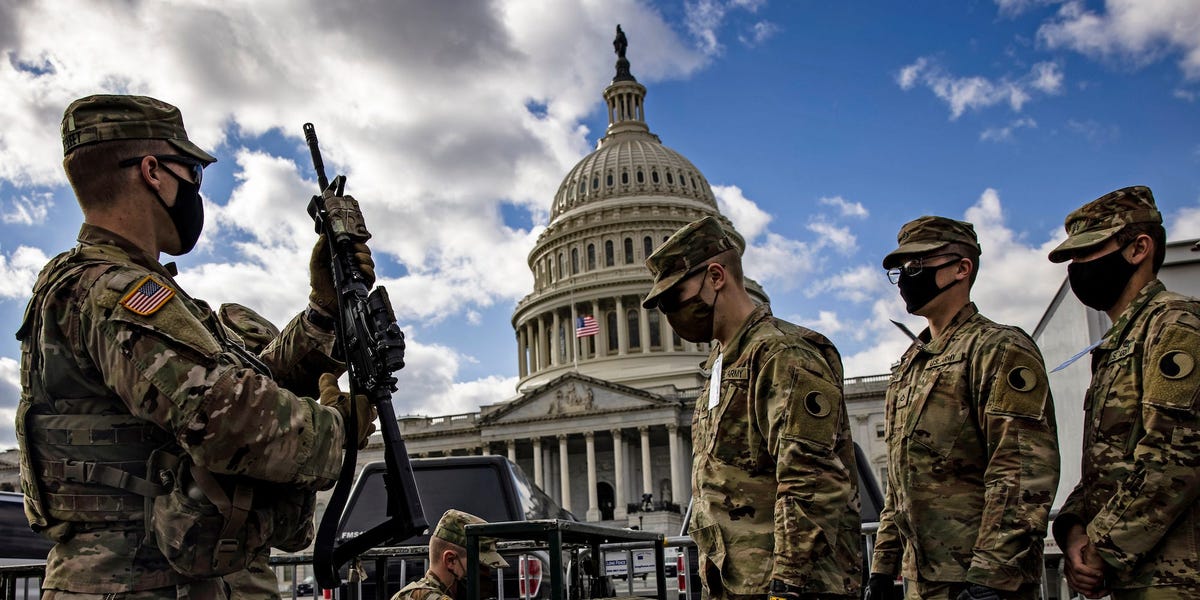 The National Guard is planning to ask up to 7,000 troops deployed to Capitol Hill to volunteer to stay until March 12, according to Military.com.

An official reportedly said the plan was still being finalized, and that Guardsmembers would not be required to remain deployed over its 31-day activation.

"We are not going to make anybody stay," spokesperson Nahaku McFadden told Military.com.

Of the roughly 25,000 troops initially deployed to the Capitol for security on Inauguration Day, 15,000 of them are expected to return to their respective states this week. Guardsmembers from all of the US states and territories like Puerto Rico were activated to support President Joe Biden's inauguration on Wednesday.

Despite the deadly violence on Capitol Hill by right-wing extremists on January 6, the inauguration that followed was without major incident, according to Guard officials.

Some lawmakers have called for the troops to return back to their states and that their presence at the Capitol was no longer necessary. Republican Sen. Tom Cotton of Arkansas, a US Army veteran, advised that the optics of thousands of the uniformed service members at the Capitol was unflattering.

"It's time to send home the troops," Cotton said during a Fox News interview. "The National Guard rushed to the scene … and we saw over 25,000 National Guard there for the last two weeks to help protect the Capitol during the inauguration."

"The inauguration is over," Cotton added. "We don't want to turn our Capitol into an armed fortress. It's time for these National Guard troopers to go home to their families, and to their jobs, and to their communities."

Cotton also said that if there was a "credible threat" against the Capitol, local law enforcement and federal agencies could respond to the crisis, rather than relying on the Guard.

The presence of uniformed troops has brought increased scrutiny on the Guard leadership and Capitol Hill security in the wake of the Capitol Hill siege. Images circulating online revealed that dozens of troops were forced to take their close-quarter breaks on the ground of a parking lot, prompting lawmakers from both parties to demand better conditions for the service members. Hundreds of troops deployed to the Capitol have reportedly tested positive for COVID-19 or are now in quarantine.