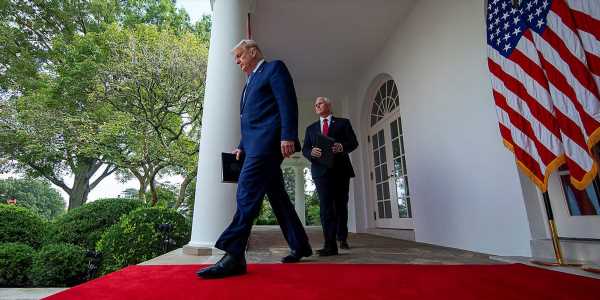 President Donald Trump put hardly any effort into checking up on Vice President Mike Pence and his family's safety after inciting a violent mob that swarmed the US Capitol, a source close to Pence told CNN.

Pence, who's president of the Senate, was at the Capitol with his wife Karen Pence, daughter Charlotte, and brother, GOP Rep. Greg Pence of Indiana, to president over the Electoral College certification — a generally ceremonial, perfunctory affair.

Ahead of the Capitol siege on Wednesday, Trump repeatedly pressured Pence to do something he did not have unilateral authority to do: overturn the election result before a joint session of Congress.

During a lie-filled speech ahead of the attempted coup at the Capitol, which delayed the certification process, Trump once again urged Pence to embrace his assault on American democracy.

"If Mike Pence does the right thing, we win the election … He has the absolute right to do it," Trump falsely stated to thousands of his supporters, before unleashing them to wreak havoc on the temple of America's democracy.

The insurrection led Congress to be evacuated and Pence was caught up in the mayhem. Four people also died as a result of the siege.

During the chaos, some of the rioters could be heard screaming, "where's Mike Pence?"according to the source close to the vice president who spoke to CNN.

"Was [Trump] concerned at all that an angry mob that he commanded to march on the Capitol might injure the vice president or his family?" the source said, going on to say that Trump and his allies made Pence a "scapegoat" for his 2020 loss.

"Rudy, Meadows and their teams have been trying to set up the vice president to take the fall as opposed to admitting they laid out false hope in all of this," the source told CNN, referring to the president's personal attorney Rudy Giuliani and White House Chief of Staff Mark Meadows.

The White House did not immediately respond to a request for comment from Insider on Thursday.

Meanwhile, as the Capitol building was overwhelmed by the pro-Trump mob, Trump attacked his own vice president via Twitter.

"Mike Pence didn't have the courage to do what should have been done to protect our Country and our Constitution," Trump said, going after Pence for not adhering to his impossible demands.

Later in the day, the vice president's chief of staff, Marc Short, said that Trump banned him from the White House.

There are now public calls from congressional Democrats and at least one Republican for Pence and Trump's Cabinet to invoke the 25th Amendment and remove him from office.