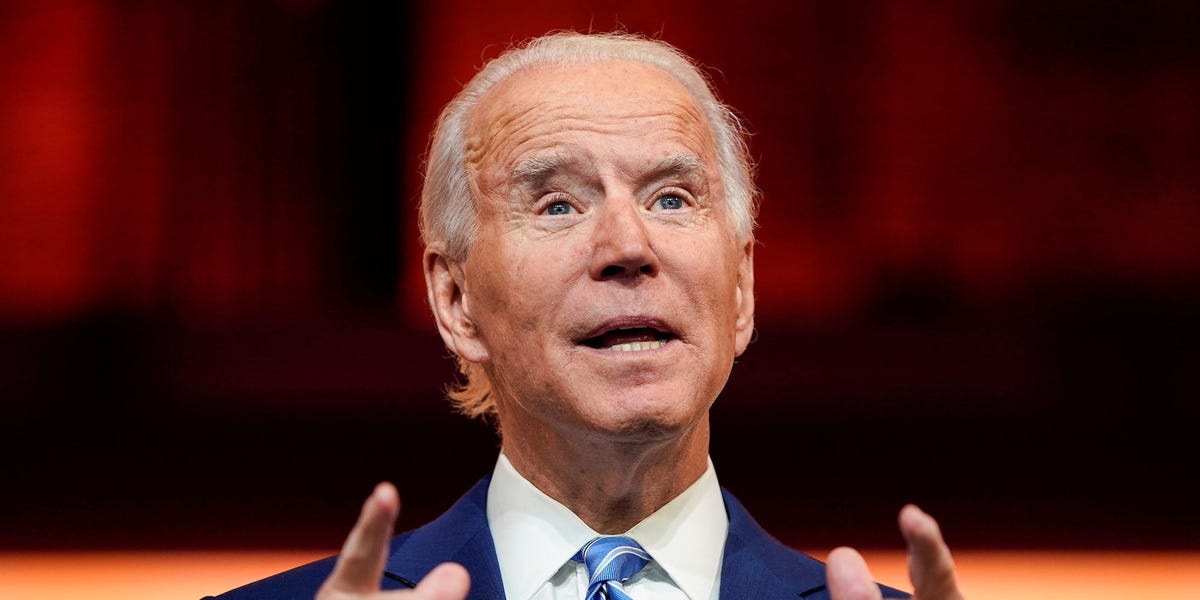 President-elect Joe Biden on Friday called for Congress to pass a COVID-19 relief package as soon as possible and again after his inauguration next month, citing the unsettling November jobs report from the Bureau of Labor Statistics.

"This is a grim jobs report. It shows an economy that is stalling. It confirms we remain in the midst of one of the worst economic and jobs crises in modern history," Biden said in a statement. "The situation requires urgent action. Americans need help and they need it now."

"But," he added, "any package passed in the lame duck session is not enough. It's just the start. Congress will need to act again in January."

As Insider previously reported, the Bureau of Labor Statistics said Friday that the US added 245,000 jobs last month, down from the revised 610,000 additions in October. The unemployment rate dropped from 6.9% to 6.7%, which is still well above pre-pandemic levels. In February, for instance, the unemployment rate was 3.4%.

Unemployment benefits from a previous COVID-19 relief bill are set to expire at the end of December, as is a federal eviction moratorium. It's estimated that roughly 12 million Americans could lose jobless benefits the day after Christmas when their pandemic-related assistance expire.

In this context, Biden said Congress and President Donald Trump "must get a deal done for the American people," emphasizing that there's "no time to lose."

The president-elect said he's "encouraged by the bipartisan efforts in the Senate around a $900 billion relief package."

Congress is under mounting pressure to pass a COVID-19 relief bill as the US coronavirus outbreak surges. The White House and Congressional leaders have been at an impasse on the matter for months, repeatedly failing to come to an agreement that satisfied all parties. Trump signed the last COVID-19 relief bill in April.

Senate Republicans have increasingly spoken out in support of a $908 billion COVID-19 relief package unveiled on Tuesday. "I've never been more hopeful that we'll get a bill," GOP Sen. Lindsey Graham of South Carolina told reporters.

The latest proposal is more expansive than a roughly $500 billion package pushed by Senate Majority Leader Mitch McConnell but much smaller than a package previously proposed by Democrats. But Democratic leaders in Congress have come out in support of the bill, with Biden also backing it.

Trump does not support the $908 billion bill and prefers McConnell's leaner proposal.

Neither package includes another round of $1,200 checks like those that came from the sweeping $2.2 trillion CARES Act signed by Trump in late March.