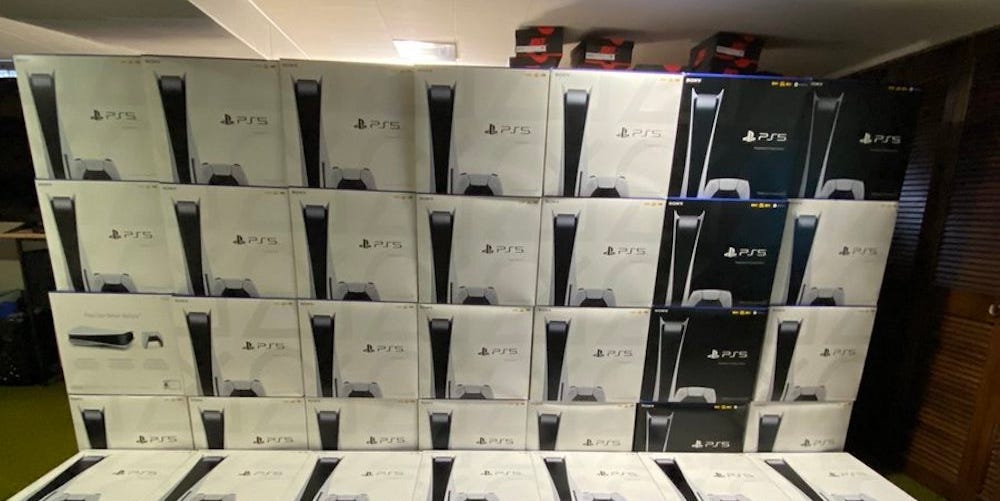 Sony's recent launch of the PlayStation 5 was frustrating for many gaming enthusiasts. The consoles, which were released in the US on November 12, sold out almost instantly. The same happened last week on launch days in the UK and across Europe.

In many cases, people looking to buy and resell these units at a premium were to blame for the quick depletion of stock. While the PS5 was available to fans via preorder prior to launch day, retailers like Walmart and Best Buy, among others, opted to sell the consoles exclusively online due to the pandemic on a first-come, first-served basis.

To secure the next-gen consoles, some resellers used a method that is popular among the sneaker community. Resellers nabbed PS5s with bots, or software scripts that expedite the checkout process online.

Read more: How Nike unwittingly turned 'Got 'Em' into a symbol of hope and glory in the increasingly competitive sneaker world

One reseller named Mike F, who asked that his full last name be withheld to security reasons, said he managed to buy 221 PS5 consoles at retail during the US launch. In less than a week, the 22-year-old managed to resell more than $40,000 worth of the new gaming console, according to payments received on his PayPal account, which were viewed by Business Insider.

The PS5 retails for $499.99, with the digital-only edition going for about $399.99. However, consoles have been reselling for upwards of $1,000 on platforms like eBay, StockX, and Instagram. And those who are selling them are making a killing.

"I did use bots and also purchased manually online," Mike told Business Insider in an interview conducted over direct messages on Twitter. "I used every resource possible."

While he still has more units in his stock, he is confident he will have no issue selling out, especially as the holidays approach.

Resellers are infiltrating everything, from sneakers to gaming

Mike is no stranger to the resale game. The 22-year-old has been reselling sneakers and other items since 2016. He dropped out of college in 2017 to pursue the business full time.

"If it can make a dime (and it's legal) I'm buying and selling it," he said, adding that he managed to sell over 2,000 above ground swimming pools online over the summer as demand for the item skyrocketed.

Mike is part of growing movement of people who are making a killing through "retail arbitrage," or the practice buying products and then reselling them online at a premium online. Exclusive groups devoted to arbitrage have become especially popular in the last few months as the pandemic and economic slump has pushed more people to seek alternative forms of income.

Groups like these generally live on Discord, an online messaging platform, and tend to focus on items with high resale values, like sneakers or trading cards. Like Mike, many of these groups took notice of the potential resale value for the PS5 and used their resources to deplete the stock.

To Mike, having prior experience in arbitrage was a massive advantage when it came to succeeding in the PS5 drop.

"I don't think anyone can do it because they don't have access to the same resources as someone like me, who's doing this every single day," he said.

Excluding the time it took to purchase the units, Mike spent over ten hours crafting a game plan for the PS5 drop, he said. He began by enlisting some friends to help him sign up for pre-ordered units in as many stores as he could hit. He paid them for helping him out, but ultimately, the profits from resale would be his.

During the official release, Mike made even more reservations to pick up units in stores and purchase as many PS5s as he could online, using bots in some cases.

"I know my way around sneaker releases/reselling, and these were very similar procedures," Mike explained. "So I knew exactly what to do."

The consensus among angry gamers is that resellers like Mike were responsible for the quick sell-out of the PS5. For people who actually want to have the system for themselves — and not to resell for a profit — the entire experience has been frustrating.

Some took to social media to voice their frustration.

When asked for his response to the anger directed towards resellers, Mike said it's not as serious as some people think and those who wait a bit longer will likely not have to pay high resale prices.

"You'll get your system eventually," he said. "There are plenty of people willing to pay a premium, it's simple supply and demand."