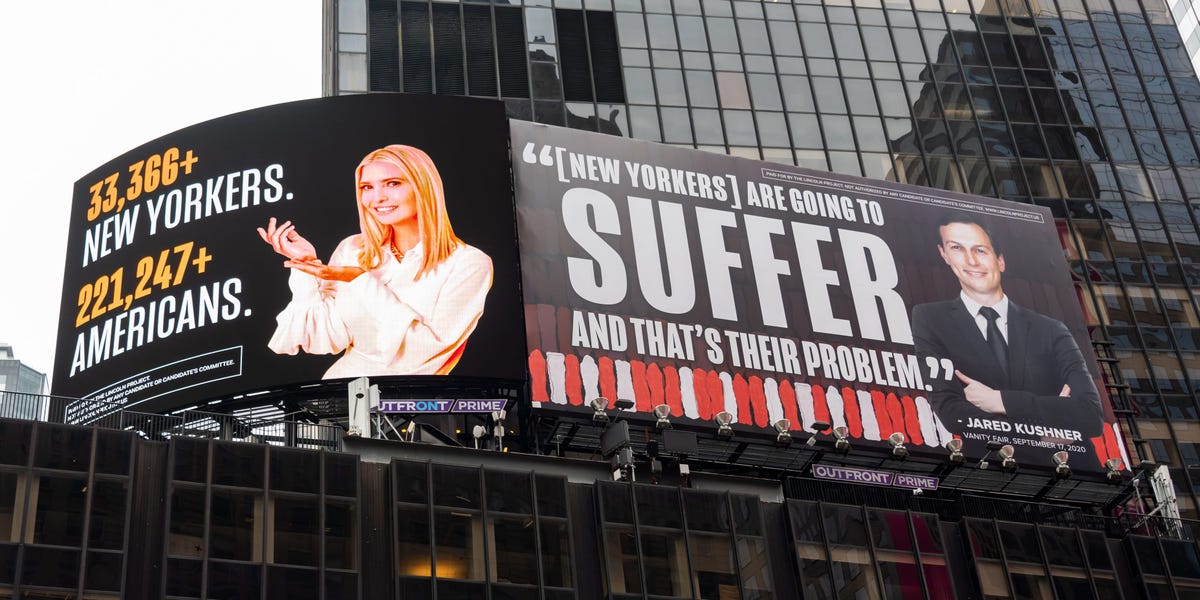 White House senior advisors Ivanka Trump and Jared Kushner have threatened to sue an anti-Trump Republican super PAC for putting up two Times Square billboards showing pictures of them smiling and posing next to figures about the US coronavirus death toll.

The two billboards, which were funded by The Lincoln Project, were unveiled Friday. The group was formed late last year by former Republicans who wanted to stop President Donald Trump's reelection.

The first billboard shows Ivanka Trump smiling and gesturing next to the New York and US coronavirus death tolls, which as of Friday said "33,366+" and "221,247+" respectively.

The second shows Jared Kushner smiling with his arms crossed next to a quote that says: "[New Yorkers] are going to suffer and that's their problem" with graphics of body bags underneath.

The US currently has the worst coronavirus outbreak in the world, and has as of Saturday recorded more than 220,000 deaths and more than 8.4 million cases, according to Johns Hopkins University data.

The US has entered its third coronavirus surge, with experts warning that it could be the deadliest.

The letter, signed by attorney Mark E. Kasowitz, said: "I am writing concerning the false, malicious and defamatory ads that the Lincoln Project is displaying on billboards in Times Square."

"If these billboard ads are not immediately removed, we will sue you for what will doubtless be enormous compensatory and punitive damages," Kasowitz said.

The Lincoln Project has responded by saying that it would not take down the billboards.

In a statement, the group said: "Jared and Ivanka have always been entitled, out-of-touch bullies who have never given the slightest indication they have any regard for the American people."

"We plan on showing them the same level of respect. "

"The billboards will stay up. We consider it important that in Times Square, the crossroads of the world, people are continuously reminded of the cruelty, audacity, and staggering lack of empathy the Trumps and the Kushners have displayed towards the American people," it added.

Both Kushner and Trump have been heavily criticized for their actions during the US coronavirus pandemic.

In the early weeks of the pandemic Kushner had formed a "shadow" White House coronavirus task force to obtain personal protective equipment, which later proved to be chaotic and ineffective.

A new documentary found that the task force consisted of a group of young volunteers who used their personal email accounts to do the job.

Ivanka Trump has also been mocked for defending her father's response to the pandemic, and criticized for being out of touch when she said she was taking advantage of the pandemic to learn how to play the guitar.

Both have also ignored venues' face-covering mandates while attending public events in the past.