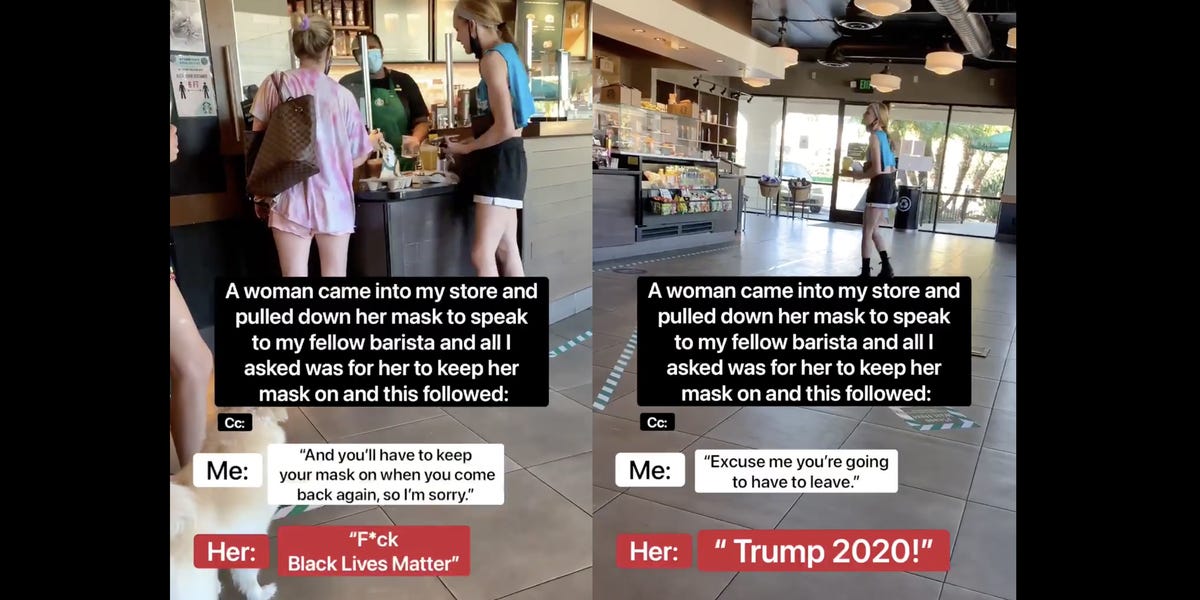 A new clash between a retail worker and an anti-mask customer was caught on camera, as employees continue to face harassment over the enforcement of policies meant to contain the spread of COVID-19.

"This is America and I don't have to do what you say," the customer yells as the barista requests that she cover her mouth with the mask, which at that point was hanging around the customer's chin. "Trump 2020. … F— Black Lives Matter!"

The incident took place at a Starbucks in San Diego, California. Starbucks requires customers and workers to wear masks in stores, and San Diego has mandated people must wear masks in public if they are going to be within six feet of others.

According to the barista, college student Alex Beckom, the customer originally complied with the request to put on a mask. However, the customer — who had previously been wearing a Trump 2020 mask — removed her mask and began accusing Beckom of "discriminating" against her because she was a Trump supporter.

Here is the TikTok of the incident, which includes explicit language from the anti-mask customer:

This was my day at work, how was yours🥰 Anyways, vote blue💙 ##starbucks ##biden2020 ##HorrorTok

"We expect our partners and customers alike to foster a welcoming environment, and this behavior is certainly not welcome in our stores," Starbucks said in a statement. "Our focus right now is providing support to our partner who demonstrated tremendous composure during a very difficult interaction."

Beckom said in a follow-up TikTok video on Tuesday that her manager told her she handled the situation with "poise and maturity." Beckom also responded to people who have been offering to send her money, saying if people donated she would share the funds with her coworkers.

"Part of the money I'm getting is going to my coworkers, because we all deal with this kind of stuff," Beckom said in the TikTok. "My situation was caught on video. … They all deserve it too."

Other restaurant and retail workers have faced similar harassment and even violence from anti-mask customers.

In San Diego alone, there have been a number of recent incidents in which workers have faced outbursts from anti-mask customers. A customer at a San Diego Burger King refused to wear his mask and was rude to employees, as documented in a viral TikTok posted by another customer who intervened earlier in October. When a Kairoa Brewing employee asked a group of customers to wear their masks, they responded by refusing to leave a tip on a $214.14 tab, CBS8 reported this week.

In some cases, anti-mask disputes have turned deadly.

An 80-year-old man died in late September, after a dispute that reportedly started when he told a fellow customer at a bar to put on a mask. A man was arrested in Aurora, Colorado on charges of attempted murder in May after allegedly shooting a Waffle House employee when told he had to wear a mask in the restaurant. A man killed a Family Dollar employee by shooting him in the head in May after the customer's daughter was asked to wear a mask in the store, according to police.

"I just want to tell customers not to disrespect us," 19-year-old Maria Resendiz told Business Insider after she was attacked by an anti-mask customer. "We're humans as well."

Read more: A 19-year-old McDonald's worker was assaulted after asking a customer to wear a mask, revealing a growing crisis in the restaurant industry

Attacks by customers who do not want to wear masks or follow other COVID-related safety measures have become so common that the CDC released guidance on how to best protect employees in late August. Last week, the National Retail Federation, the industry's largest trade group, and the Crisis Prevention Institute, a training organization, announced they had produced a training on how employees can deal with clashes with customers.

"One of the major scenarios [in the online training] is around an employee asking a customer to wear a mask, and he reacts," Adam Lukoskie, vice president of the NRF Foundation, told The New York Times. "There's another scenario where a mother and child are there and are upset this gentleman is not wearing a mask so then the employee has to help make peace."

With the pandemic dragging on, workers will likely face many more months enforcing safety protocols. Dr. Anthony Fauci told Business Insider in September that he expects most Americans will need to wear masks through the end of 2021, even if a vaccine for COVID-19 is released at an earlier date.