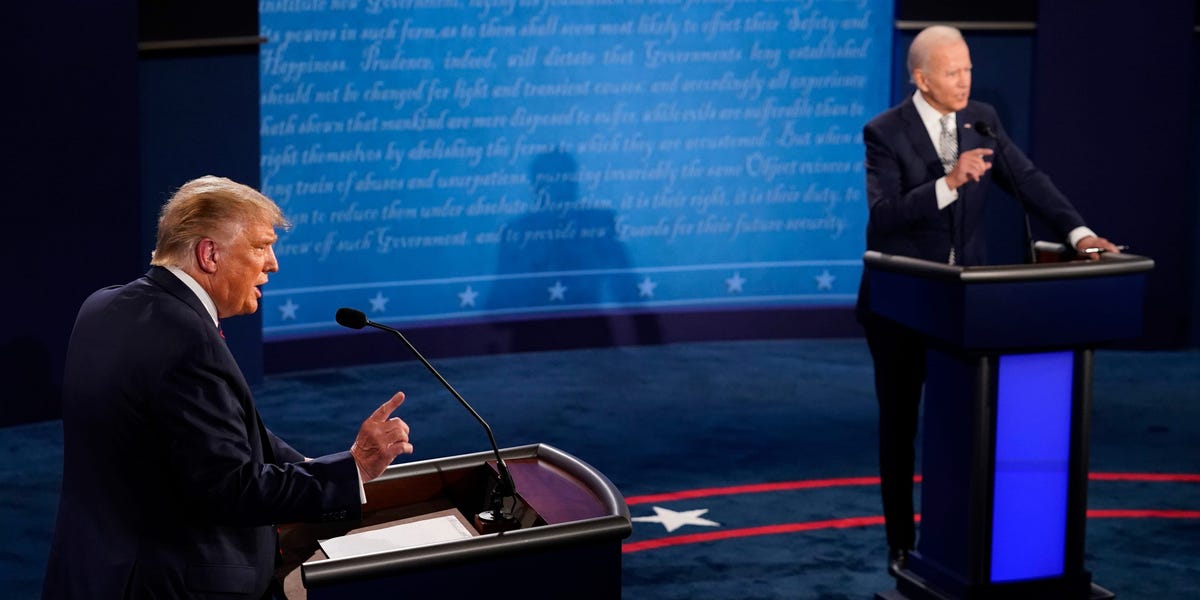 The first presidential debate of the 2020 general election was so mortifyingly incoherent and stupid that CNN anchor Wolf Blitzer said he wouldn't be surprised if it's the last one, too.

It was a clash of grumpy old white men, and for all their mutual viciousness, their styles were markedly different.

On the one hand you had Joe Biden doing his typical "crass but tough old guy" schtick. Opposite him was President Donald Trump, who was an internet troll in the flesh. And he was unleashed on a presidential debate stage.

Rules are pointless when dealing with Trump

Joe Biden was the old un-politically correct white guy in the most diverse group of Democratic contenders ever. He was the embodiment of a dated establishment and archaic social mores when much of the rest of the field was trying to out-woke each other.

And he won the nomination, handily.

For the better part of the past two years, the former vice president has played up his Rust Belt working class roots, his close relationships with the Black communities of Delaware, and his position as Barack Obama's "brother from another mother."

The image was simple. Uncle Joe's the scrappy authentic kid from Scranton. He's mad as hell, and not afraid to get his knuckles dirty.

He even channeled his rough-around-the-edges Irish Catholic roots and said he would have liked to have beaten up President Donald Trump behind the gym.

But rather than come out swinging in his first debate as the Democratic presidential nominee, he acted surprised to be in a room with a bully that doesn't respect the rules.

Trump relentlessly interrupted Biden every time he opened his mouth. (Trump interrupted the moderator, Fox News anchor Chris Wallace, almost as often.) And he got his red-meat-for-the-MAGA-base zingers in.

Early on, Trump knocked Biden's concentration off course after screaming "Bernie Sanders" and "socialized medicine," as Biden was talking about healthcare.

The president, a Wharton School of Business graduate and supposed candidate of the "regular guy" populist right, insulted Biden for attending a state school and name dropped antifa at every opportunity.

Biden called out Trump for insulting the military dead as "suckers" and invoked the memory of his late son, Beau, an Army veteran.

The president, quick witted and without a conscience, retorted, "I didn't know Beau." Then he laid into Biden's son, Hunter.

Trump got viciously personal, impugning Hunter Biden for his struggle with drug addiction, and throwing out innuendos about unproven accusations of foreign payoffs.

Trump even called Biden "number two," in an apparent reference to poop.

That's not to say Biden didn't fight back.

He called Trump a "liar" and a "racist." And if this weren't 2020, it'd be pretty big news that a former vice president called a sitting president those words on a debate stage.

Biden threw in the occasional tough guy cliche, like when he told Trump, "You picked the wrong guy on the wrong night at the wrong time." He told Wallace that it was "hard to get a word in with this clown. Excuse me, this person," referring to Trump. Biden also called Trump "unpresidential" and asked, "Would you shut up man?"

But Biden lacked Trump's conviction when throwing mud, for better or worse. His best line, "You're the worst president that America has ever had," was delivered almost as a muttered sigh.

Biden won the Democratic nomination as the same politician he's always been: the guy who has a lot of friends because he never fights too dirty. His campaign is built on a "return to normalcy," that time when grotesque behavior like Trump's would have turned off the socially conservative voters that became Trump's base.

So it makes sense that Biden wouldn't disrespect the agreed-upon rules of the debate. It's also why he didn't buzz around in Trump's ear with non-sequiturs every time he tried to speak, as the president did to him.

If this embarrassing, chaotic, substantively void debate is any indication, for the next debates Trump's going to do what he always does. He'll lie, steamroll, and make absolutely no sense. But he'll look confident doing it.

Maybe Biden's strategy of punching back, but not too hard, will work in the end. Debates usually don't matter all that much, most are quickly forgotten. His tough but civil approach could be the right balance to make it through a few news cycles.

Biden fought rough without coming off like Trump did, which was as a flailing maniac. The strategy worked well enough tonight, even if it did look like Biden was growing weary at the constant taunting.

It's still a risky strategy for Biden in the next two debates, because Trump's not going to ever fight fair, and these are the last debates of his life.