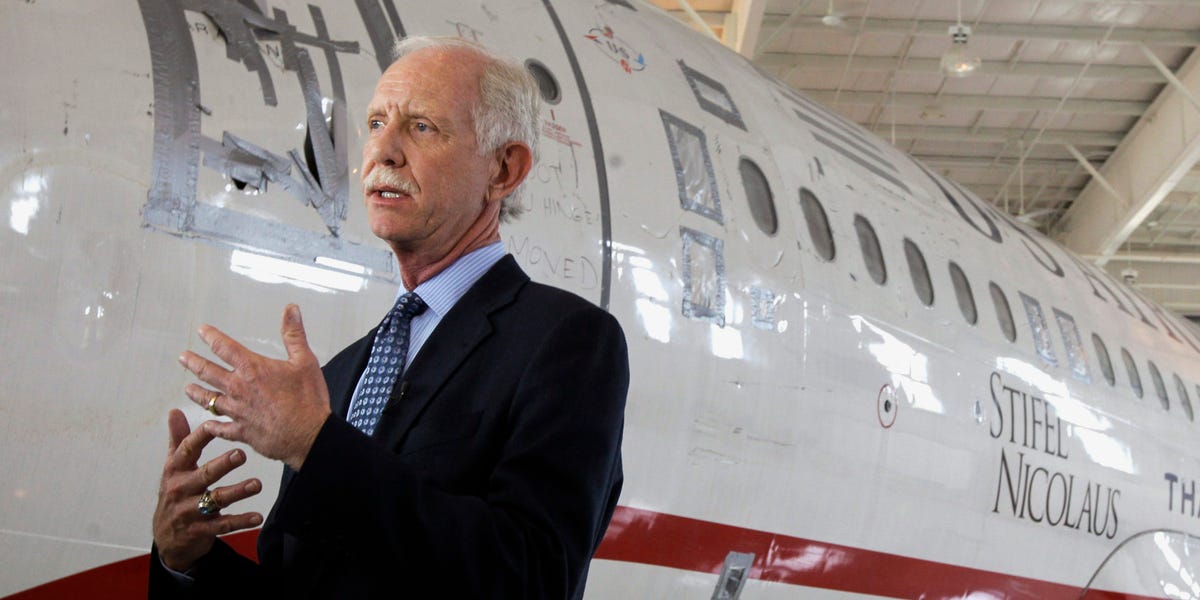 Airlines have been divided over whether blocking middle seats on airplanes during the coronavirus pandemic is worthwhile, and whether it really makes flying safer.

Now, one of the most authoritative figures in aviation safety has weighed in — and he doesn't want anyone sitting next to him.

Captain Chesley Burnett "Sully" Sullenberger III, the pilot famous for landing a damaged plane on the Hudson River with no fatalities in 2009, said that he only plans to fly aboard airlines that block off middle seats during the pandemic.

Sullenberger cited a study from MIT that found that leaving the middle seat empty roughly halves the risk of catching the novel coronavirus during a flight.

"And I'll tell you, I'm going to fly on an airplane where the middle seats are kept empty, knowing that my chances of catching COVID are half that if middle seat were filled," Sullenberger said.

Sullenberger compared the approach to coronavirus risk mitigation to the rules and practices that govern commercial flight safety.

"Air travel has become ultra safe, something I wouldn't have thought possible 35 or 40 years ago," he said. "Airline accidents now are very rare. But we must keep on making investments to keep it either that safe or getting safer investments in people, in systems, in technology. "

Sullenberger also faulted the federal government for not developing standardized practices to be employed nationwide during the pandemic.

"One of the biggest failure so far in terms of our air transportation system is that in this country we have never had a federal face covering mandate in spite of the fact that many have been calling for that," Sullenberger said. "And that would have been one of the most effective things that we could do."

"Instead, individual airlines are having to come up with their own policies and procedures," he added. "And to try to encourage the flight attendants to be the cop on the beat and to enforce these requirements that are really very basic."

"It really disturbs me greatly the extent to which for this whole episode, unlike any other crisis we've had in our nation's history, these basic safety requirements have become so extremely politicized and an extension of an ongoing cultural war," Sullenberger said. "And that has done and continues to do great harm."

"We have acquired the data to know what works and what doesn't, where the relative risks are and began to take effective steps to mitigate each part of the process," he added. "You see, there's not one silver bullet that will solve the whole problem. Instead, we must rely upon a whole panoply of individual actions that, in aggregate, can make us all safer."

Schmidt also spoke with former Airbus CEO Tom Enders during the podcast episode. Enders similarly called for standardized regulations to help reduce the risk of COVID-19 on planes, as well as to reassure passengers.

"For the international air traffic to function seamlessly, as it did almost before COVID-19, it's wildly important we have the same rules all over the place," Enders said.

Enders also noted the irony of the fact that commercial aviation is, statistically, among the safest ways to travel, but has been so badly affected by the coronavirus pandemic.

"A simple statistic is that it's more dangerous to drive to the airport than it is to fly from the airport," Enders said. "So it seems totally unfair to the airline industry and the aircraft industry to have to deal with us. But nevertheless, here we are."

The podcast episode was released on Tuesday. You can find the full 40-minute episode here.