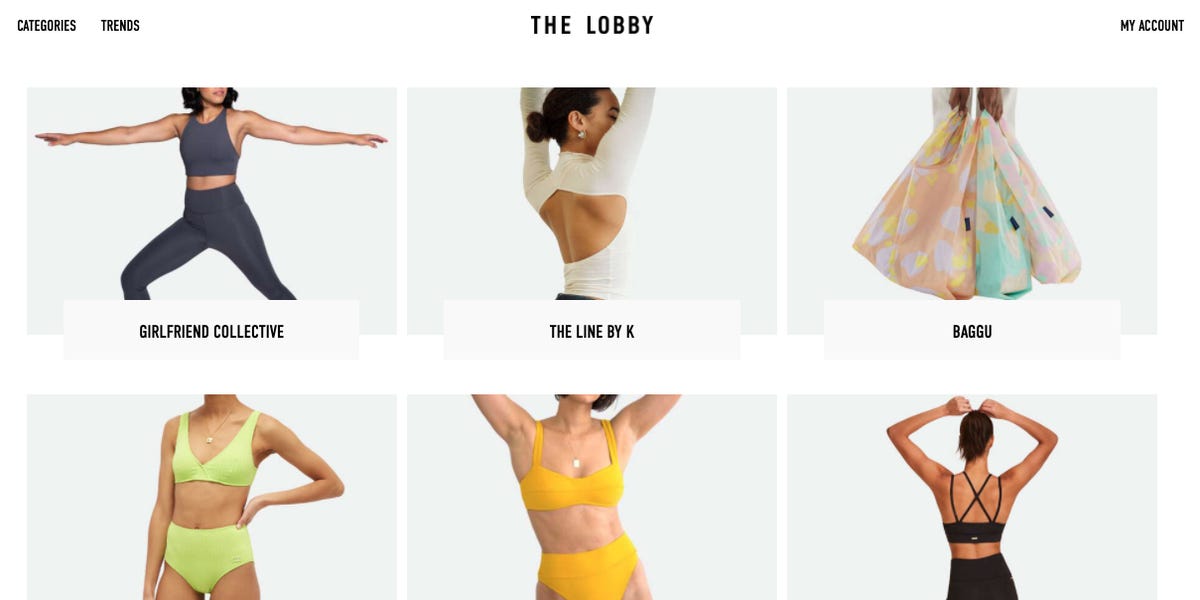 In a world that now runs entirely on streaming platforms, The Lobby is hitching its wagon to video commerce as the next big big trend in online shopping.

The Lobby — a digital marketplace described by founder and CEO Abigail Holt as "QVC meets TikTok" — rolled out nationally on Tuesday, bringing its feed of influencer-produced shoppable videos to the masses. Though the company first hit the scene in 2018 as a try-before-you-buy shopping service similar to Amazon Prime Wardrobe, its latest iteration is vying to become a bonafide video marketplace with an emphasis on direct-to-consumer brands.

As of launch on Tuesday, The Lobby currently has a roster of 30 participating DTC companies, including the athleisure company Girlfriend Collective, celebrity-favorite swimwear retailer Solid and Striped, and the high-end loungewear and fashion company Lunya. Shoppers are instructed to watch videos of influencers try on products that they can immediately add to shopping carts on the site without disrupting the viewing experience.

Holt — who previously worked for several years in various e-commerce roles, including as a product lead at Google Shopping — said her aim is to improve the digital shopping experience by merging the best parts of online and brick-and-mortar shopping while reducing the pain points.

"I felt like online shopping never felt the same kind of visceral, serendipitous fun [of brick-and-mortar]," Holt told Business Insider. "It was always very convenient, but besides that felt flat and emotionless. It felt like work."

For Holt, that initially meant The Lobby would get rid of pesky shipping and return fees. Though integrating video in some capacity had always been part of the plan, Holt said the pandemic forced her team to rethink how people are discovering brands and styles now, and ultimately moved to double down.

"Immediately we knew we needed to be more bullish on video because consumers want video," she said. "We sensed people needed and wanted normalcy and connection, and they would love to go to stores with their friends but they can't. We thought a lot about how do we recreate that feeling. It clicked that we should work with influencers and content creators to do that."

The platform — which in beta testing conducted 90% of its business on mobile, but is also available in a less-optimized form on desktop — currently features 40 influencers, who share videos between 30-to-90 seconds of themselves wearing and reviewing clothing and accessories.

Holt said that while the company provides some general guidelines — including demonstrating fit, how it moves, and how to style it — most of the creative vision is left to the influencers themselves, most of which shoot the videos in their own homes.

"We thought a lot about the right format and the right length, and what people would want to shop," she said. "We landed on short-form videos because we felt especially with how TikTok has ushered in video, we really liked how it was bite-size and quick."

TikTok ultimately served as a significant inspiration for The Lobby, particularly given the social media platform's massive growth, now at more than 500 million global monthly users. With The Lobby, Holt was looking to capitalize on the lack of shoppable video content in the TikTok app, which began soft-launching a commerce tool in November 2019 with brands like Levi's, but has yet to widely rollout shopping capabilities.

Holt said she also saw an opportunity in building upon the overall lack of fashion content on TikTok, where luxury retailers, for example, are only just now joining the platform in recent months. While brands like Gucci are flourishing on the app and finding an engaged Gen Z audience through its whimsical posts, others like Tiffany and Co. and Prada remain dormant on their profiles.

"TikTok is not shoppable and it's not really optimized for a shopping experience, nor is the content really," Holt said. "There's not a ton of fashion content, though they're definitely making a push to have more, and fashion influencers are only just starting to get onto TikTok."

Stephanie Hunt, senior director of Solid & Striped, said though the swimwear brand is "pretty picky" when forging partnerships, The Lobby stood out thanks to its "boutique online experience" that felt different from other e-commerce marketplaces.

Looking ahead, Hunt said that she foresees platforms like The Lobby — and video commerce at large — will play a major role in how people shop even beyond the pandemic.

"It's a really creative way to connect with the customer," Hunt said. "Seeing the product in real time when you can't actually be in the store, especially right now, is really helpful for our customers. This video concept is something that we think will be a big part of e-commerce in the future."

Holt echoed Hunt, adding that even if TikTok does unveil universal shopping in the near future, she doesn't foresee it having much traction, citing how Instagram shopping never really took off after it was first launched in 2016, and later expanded to Stories in 2018.

"It's kind of the closest that you can get to the real-life shopping experience, shopping in a store with friends, in today's world," Holt said, in regards to The Lobby's role during the pandemic. "Video is becoming more important and everything is on Zoom. Since we're not able to be there in person, video is the next best thing."