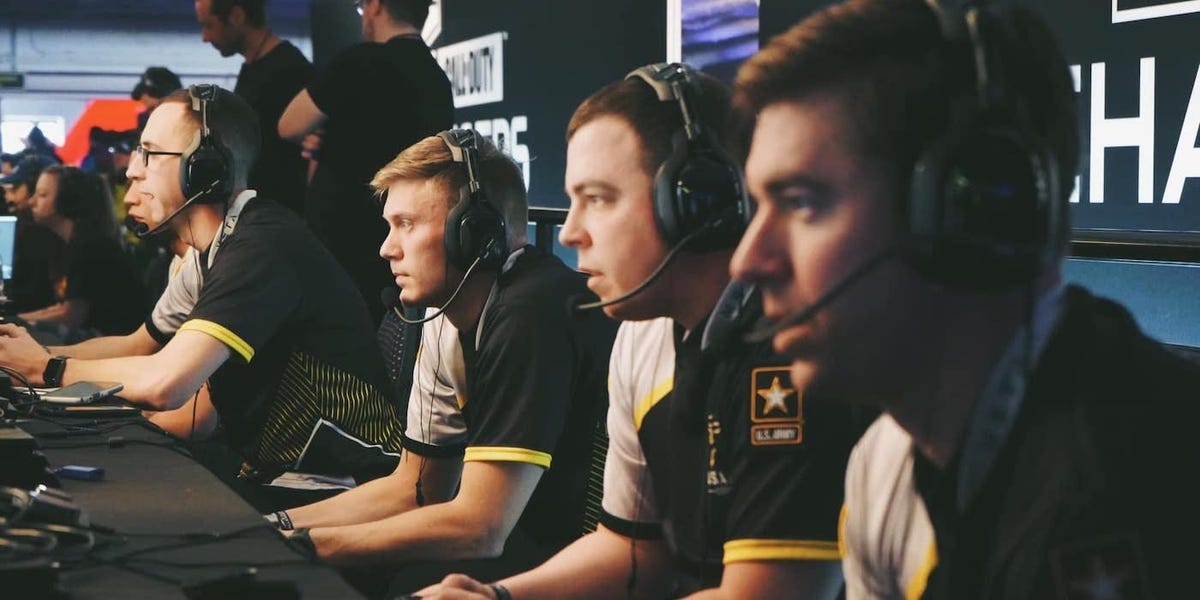 Over the past few years, multiple branches of the US military have moved their advertising focus towards the esports and video game streaming world. Both the US Army and Navy have decided to dip their toes into the gaming industry, and both have created esports teams to stream content on the live streaming platform Twitch.

While the military has said the move into gaming is simply to connect with a younger generation, in reality it is an attempt to glorify war through video games to bring in new young recruits. And it's become clear that this process is misleading, predatory, and outright harmful.

An internal Navy memo makes it clear that the job is nearly identical to a recruiter:

"The qualifications to become a [streamer] are identical to the qualifications needed for recruiting duty… Potential team member selectees will be screened for team fit and recruiting duty… Selected team members will receive recruiting training at Navy Recruiter Orientation Unit (NORU)…The intent of NORU training will be to further develop communication skills and to ensure team members understand the types of information sought by those inquiring about service in the Navy."

Though the Navy does not consider the esports team members to be official recruiters, they must still have the same qualifications and attend NORU, the Navy's recruitment school. Even the stated purpose of the US Navy's Esports Team — to connect prospective recruits with official recruiters — makes the end goal clear. At least one of the streamers is a recruiter during his day job, yet on the US Navy's Esports website, his occupation is listed as "Fire Controlman."

"It's part of the Navy's "big picture marketing strategy…One thing the military really tries to do is show that we're relatable. We want to show that the military is relatable to our target audience, which is predominantly 17 to 24-year olds and that these relatable people do relatable things," one member of the Navy told the Navy Times.

Even if the streamers themselves aren't actually doing the recruiting, their goal as a unit is to bring in new recruits, so it's recruiting in all but name.

Particularly worrying is the age of people being exposed to this process. Twitch is a platform full of children as young as 13, the minimum age you must be to to use the platform. The US Military is not supposed to contact teens until they turn 17 or are in their junior year of high school for recruitment. The Army was found to be promoting giveaways that linked directly to recruiting forms on an Army recruitment website to allow them to collect contact information of recruits who were potentially underage.

The US Navy's stream is set for mature audiences only, meaning viewers must enter their age to verify they are at least 18 to view the stream, but these methods of protecting children from unsuitable content are notoriously weak and easy to get around. It is possible, even inevitable, for a Navy streamer to encounter children who don't meet the requirements to be recruited.

Joining the military is a serious commitment, not one to be taken lightly, but by playing first-person shooter games like Call of Duty: Modern Warfare, Escape from Tarkov, and Counter-Strike: Global Offensive, the military is potentially trivializing war to the impressionable minds of thousands of younger viewers.

The Navy's Twitch bio section, until very recently, contained the phrase: "Other people will tell you not to stay up all night looking at a screen. We'll pay you to do it." This could easily be interpreted by a child as the Navy offering to pay them to play video games, when in reality, before even applying to join the US Navy's esports Team, they would have to obtain many qualifications to be eligible to join.

And during there have also been problems with the content on the streams themselves.  In September 2020, a Navy streamer was seen playing the game, Among Us, with characters named "Japan 1945," "Nagasaki," and a black crewmate named, "gamer word," a reference to the N-word. The Navy then ended their stream early, citing "technical difficulties" after floods of new viewers entered the chat asking about the names.

This is extremely disturbing. Joking about atrocities committed by the United States that resulted in the deaths of over 100,000 civilians helps to normalize and excuse these tragic events.

Gen Z has better things to do

Gen Z generally views climate change as the current greatest threat to the world. The War in Afghanistan is older than many of them. They have lived their entire lives with this country at war. Instead of joining the military to continue to fight these pointless wars, they should be in school acquiring the skills they will need to attempt to solve the greatest threat that humanity has ever faced. Instead of increasing the military budget as the US Government has in recent years, it should be spending more money investing in green technology and research into environmental issues and climate change.

If you ever decide to voice these same concerns to the Army and Navy's Twitch streams, you might face a lot of friction, as both branches have been censoring viewers who post unfavorable messages in the chat functions. Many users were banned from commenting on the Army's stream for asking questions about "war crimes" or speaking out against the military's presence on Twitch.

The Navy's moderation policies are harmful to open debate and likely unconstitutional. Users have been temporarily banned for asking questions such as: "What is the difference between recruiting and outreach and awareness?" These questions are completely valid and ought to be answered.

When I messaged a moderator requesting to be unbanned, the moderator told me "sry, after review of your past chats, that's a no. Try to be a nicer person next time. Have a great day." After a letter was sent by the Knight First Amendment Institute at Columbia University requesting that both the Army and Navy unbanned all of the viewers it had banned, both branches complied and introduced new chat policies.

The Navy and Army are actively targeting children for recruitment by enticing them with the prospect of playing video games for a living. This practice is extraordinarily predatory. Military streamers are not talking about the pros and cons of joining the military when they talk about their lived experiences. They are talking about how much fun they are having playing video games. Joining the military is a profoundly serious decision, yet ours is glorifying war and attempting to influence a generation of young Americans to join.

Timmy is a college student planning to study Economics and Government at the College of William & Mary. He is originally from Alexandria, VA.