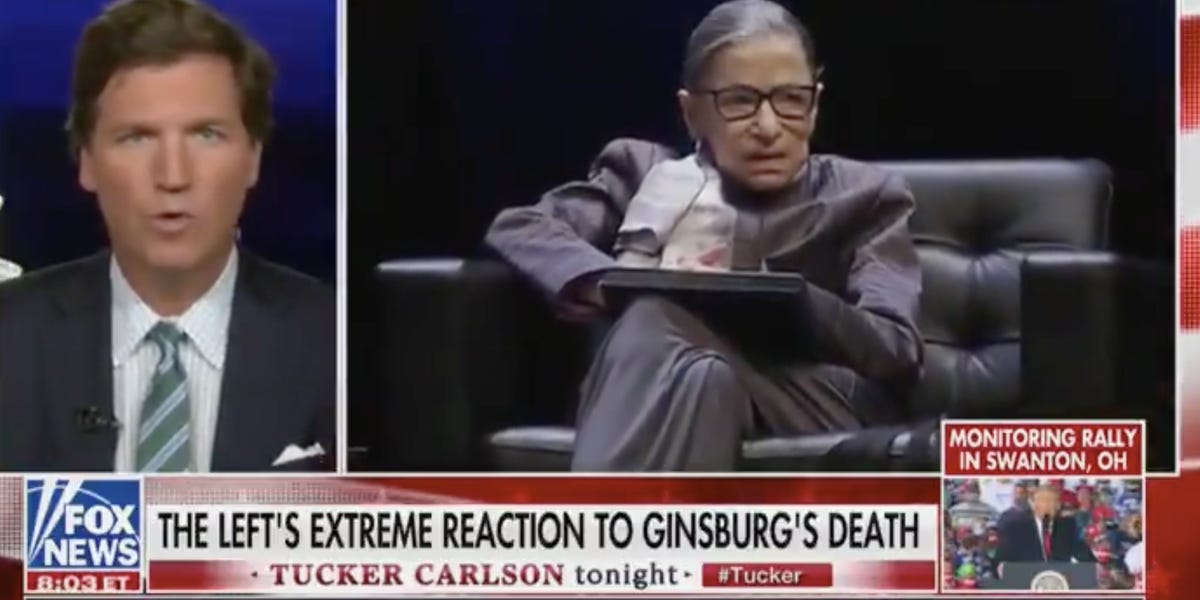 Fox News host Tucker Carlson echoed President Donald Trump in casting doubt on Ruth Bader Ginsburg's family's account of her dying wish, remarking "If it were true, it would be pathetic."

"My most fervent wish is that I will not be replaced until a new president is installed," Ginsburg told her granddaughter.

The issue of how and when to fill Ginsburg's seat has become an intensely-debated issue since, split on partisan lines. Numerous Democrats have cited Ginsburg's words in arguing that a nomination for her replacement should not be made until after the November election.

On Monday night's edition of his show, Tucker Carlson Tonight, addressed the controversy, and sought to cast doubt on the account.

"Keep in mind, we don't know actually what Ruth Bader Ginsburg's final words were," Carlson said. "Did she really leave this world fretting about a presidential election?

"We don't believe that for a second," he continued. "If it were true, it would be pathetic because life is bigger than politics, even this year."

Carlson's attack echoed comments made by President Donald Trump earlier in a phone-in with "Fox & Friends," where he insinuated that his Democratic foes could have invented the wish.

"That came out of the wind, it sounds so beautiful. But that sounds like a Schumer deal or maybe a Pelosi or Shifty Schiff," Trump said, adding, "Maybe she did and maybe she didn't."

The fight over replacing Ginsburg on the Supreme Court adds another layer of controversy to this year's election, with Senate Republicans moving within hours of her death to begin the process for nominating a replacement.

Democrats are accusing Republicans of hypocrisy, pointing to the refusal by GOP lawmakers in 2016 to consider Barack Obama's Supreme Court nominee Merrick Garland, citing the proximity of the presidential election.

Democratic leader have pledged to use scorched-earth tactics in opposing the GOP's rush to fill the position, with Schumer saying that a Democrat-controlled Senate could even expand the number of Supreme Court justices in response.