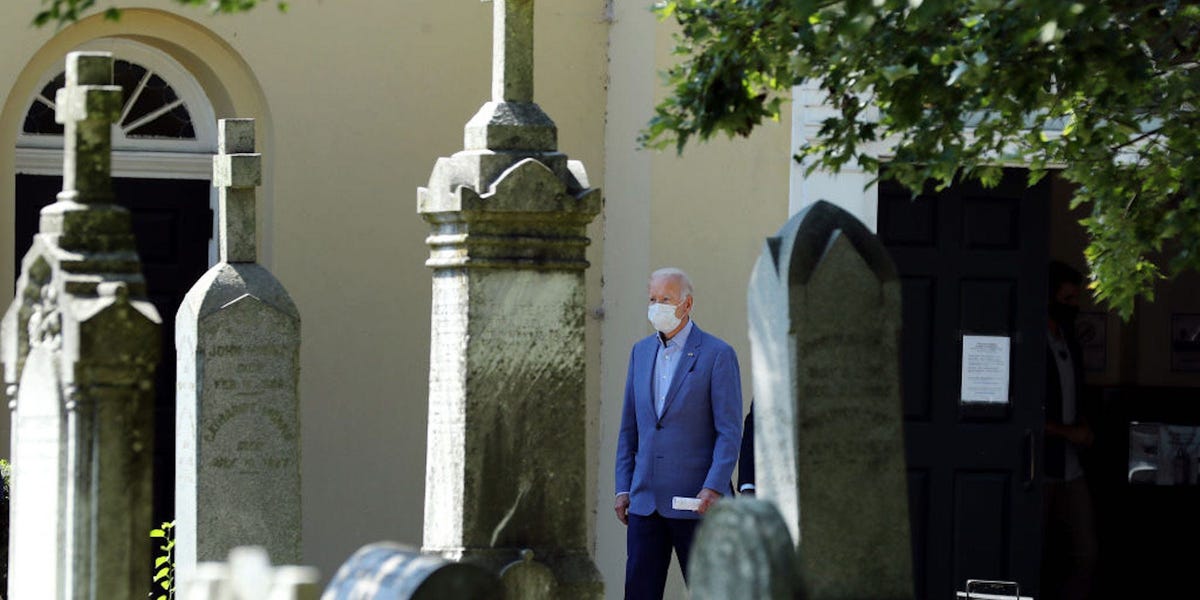 An official at President Donald Trump's reelection campaign has been roundly criticized for a tweet in which he apparently mocked Democratic presidential nominee Joe Biden as he visited the graveyard in Delaware where his son, daughter, and first wife are buried.

In a tweet Sunday from the account of Francis Brennan, the Trump campaign's Director of Strategic Response, said Biden was "meandering along" instead of talking to reporters during a Sunday morning visit to attend mass at the St. Joseph on the Brandywine Roman Catholic Church in Wilmington, Delaware.

Biden's first wife, Neilia Biden, and infant daughter Naomi, who died in a 1973 car accident, are buried in the graveyard.

His son, Beau Biden, who survived the crash, died of cancer in 2015 aged 46, and is also buried in the graveyard.

In a video of Biden's visit posted by Brennan with the tweet the former vice president can be seen waving to journalists while walking through the cemetery.

The tweet by Brennan, who works in the Trump campaign "war room" devising viral attacks on Biden, echoes Republican claims that Biden avoids engaging with the media.

On Twitter, critics said Brennan's remarks were appallingly insensitive, and called on him to apologize.

"Like the next President @JoeBiden, I understand what it's like to go to a cemetery to visit your child. I actually do meander and focus on my personal grief and my daughter," tweeted campaigner Fred Guttenberg, whose 14-year-old daughter, Jaime, was killed in the 2018 Parkland High School shootings.

"What sub human life form are you that you would tweet this & think it was a good idea?"

The  Trump campaign did not immediately respond to a request for comment on the criticism, or to a question about why the tweet remains on Brenan's feed.

In what is shaping up to be among the most vicious presidential races in recent history, the Trump campaign has focused much of its output on smearing Biden's character, and questioning his health.

The campaign has questioned Biden as in cognitive decline, homing in on his occasional verbal gaffes. In May, Trump's son, Donald Trump Jr, shared an Instagram meme baselessly alleging that Biden is a "pedophile."