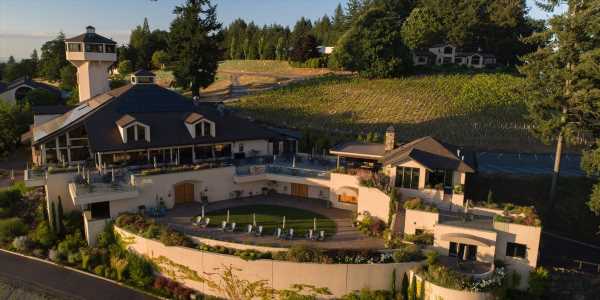 Things were looking pretty rosé for Willamette Valley Vineyards at the beginning of 2020. Oregon's only publicly-traded winery (Nasdaq: WVVI) had recently been named Wine Enthusiast's Innovator of the Year, along with three other companies, for its partnership in the Oregon Solidarity project, which rescued several tons of valuable wine grapes from southern Oregon that might have otherwise gone to waste due to a contract dispute. It broke ground on a luxurious new sparkling wine production facility and education center in the heart of Oregon's wine country, and was on track to have record Q1 sales.

Then the COVID-19 crisis began. On March 17, Oregon Governor Kate Brown issued an executive order prohibiting restaurants from serving food and drinks onsite. Just like that, the company's tasting rooms and restaurant, which accounted for 40% of its sales, were shuttered.

Although the crisis is far from over, Willamette Valley Vineyards has shown an impressive ability to sustain itself during the pandemic. Sales were actually slightly higher while the tasting room was shut than they'd been during the same period a year earlier, according to Christine Clair, winery director at Willamette. The company hasn't laid off a single person who was willing to transition to another role; in fact, it's actually hired new people, going from 229 employees on March 16 to 261 on June 30.

Much of the vineyards' success has to do with expanding an existing ambassador program that allowed it to give individualized, personal service to customers. But CEO Jim Bernau, the Oregon native who started the winery in 1983, believes it has just as much to do with the company's long-term work to connect with enthusiastic wine consumers. That effort has built a loyalty to the brand that didn't erode — and maybe even strengthened — when times got tough.

Ambassadors add a human touch and creativity to the business

When the ability to do sales at the tasting room vanished, Willamette Valley Vineyards turned to its wine ambassadors. It transitioned many tasting room staffers to the program, which now has 15 people in its ranks. Thanks to their efforts, Q2 sales were also higher in 2020 than they were in 2019, according to Clair.

One of the attributes that's helped the program succeed is collecting and mining customer data.

Another is the program's emphasis on education and storytelling. In addition to deep knowledge of Willamette Valley Vineyards' products, ambassadors can discuss Oregon's terroir, soils, appellations, and history as a fine wine region. They can lead blending seminars and talk about the variety of flavors a person may experience in different clones of Pinot Noir.

Ambassadors are given both the direction and flexibility they need to successfully utilize their specific skills. They receive training and education on the company's products and the wine industry at large as well as best practices that have worked for others in their position.

"Every Wednesday, we have a team huddle and talk about, 'What was your biggest success for the week, and what's coming up?'" Clair said. To keep staff motivated, the company sets ambitious monthly sales goals and requires everyone to fill out a weekly activity report.

But how ambassadors meet those goals is largely up to them. If they like to talk on the phone, they can make calls. If they prefer texting, they can contact consumers who have listed that as their preferred method of communication. Some have reached out to contacts in the corporate world and hosted wine tastings by Zoom at virtual retreats. Several have made educational and entertaining videos. (This one of a wine truck substituting for the local ice cream truck was particularly popular.) One woman grew up in Texas and has found that her understanding of the Lone Star State helps her sell more wine.

Most importantly, ambassadors haven't lost sight of the tremendous value of human connection — especially at a time when the person-to-person interaction that used to take place in restaurants and bars can be impossible. Clair called out a staffer who recently made a contactless delivery to a customer's home. When she arrived, "The woman opened her door and said, 'I haven't been out of the house in over two weeks because I'm high risk.' They had a 45-minute conversation outside of the house because she hadn't talked to anyone in so long," Clair said.

Since founding Willamette Valley Vineyards, Bernau has targeted consumers who are not just casual wine drinkers, but what he calls "wine enthusiasts" — people who are active, excited consumers of the product the company sells.

"Our customers are more than customers," he said. "They're brand champions and they're industry champions. They want to support their aspirational goals for our state and for our valley."

The company also does a lot to give back to the community. During the pandemic, it's continued to make donations to nonprofits such as Meals on Wheels, the Oregon Humane Society, the local food bank, and the Historic Carousel and Museum in nearby Albany.

These efforts don't appeal to everyone, Bernau noted. But those who appreciate them develop greater allegiance to the company. Customers today, he said, want to buy more than things. "They buy values," he said. "They buy things that represent them and what they believe."

Bernau has built further ownership in the company by actually allowing customers to be owners. In 1989, Willamette Valley Vineyards conducted the first successful stock offering using the then-new federal Regulation A, which was designed to help small companies generate revenue from small owners. Over 5,000 people bought in, giving them both a financial and emotional stake in the company. The program has worked so well that Willamette Valley Vineyards is in the beginning stages of offering a second Series A round.

Many customers have spent the pandemic thinking long and hard about where they spend their dollars. They've prioritized American-made products or brands to which they felt a connection, mindful that their decisions might very well mean life or death for their favorite companies.

"Our customers aren't just ingesting wine as a beverage. They're on a mission with us," Bernau said. During this difficult time, that's made all the difference.