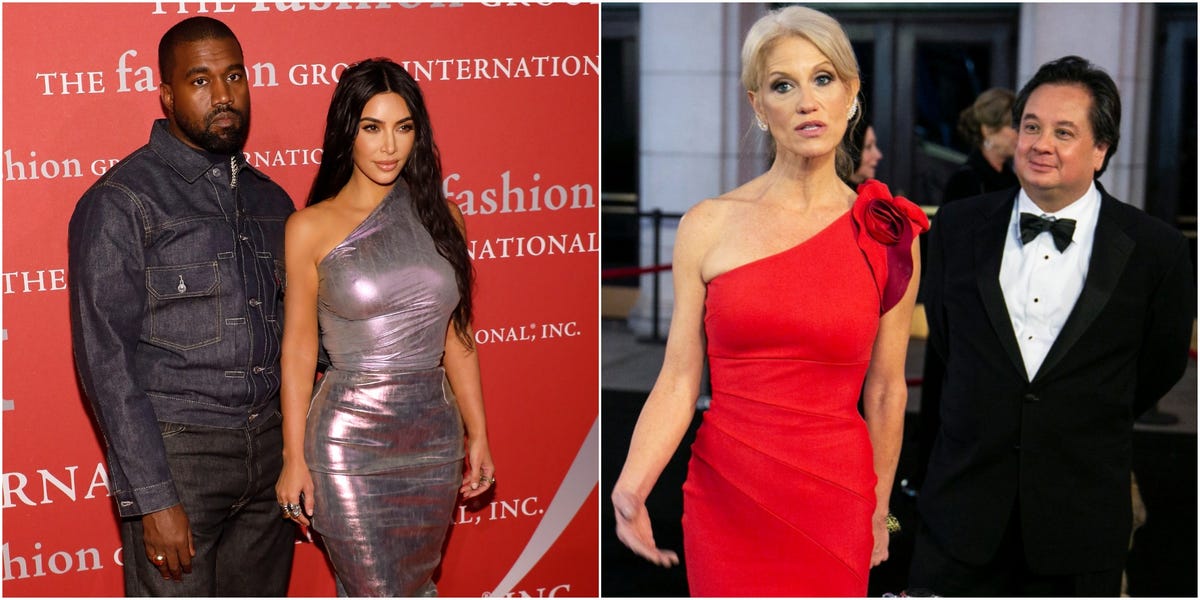 Kellyanne Conway is one of President Donald Trump's most trusted advisors, but her husband George is one of his biggest critics. 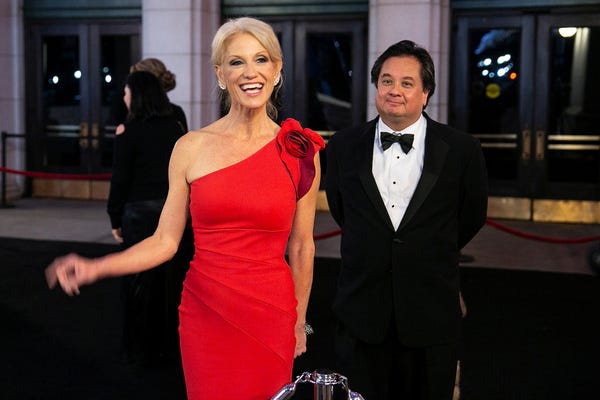 George Conway, a conservative lawyer, has penned op-eds in the The Atlantic and The Washington Post about why Trump is "unfit for office" and will lose reelection. He's also criticized the president on Twitter numerous times.

It has put his wife, Kellyanne, in the awkward position of often having to respond to her husband's arguments in televised interviews.

In March 2019, after Trump called her husband a "whack job," Kellyanne Conway told Fox Business she "appreciated the president defending" her.

She also said it was "unlike" her husband to speak out against the president, since he is "traditionally a very private person."

"I was raised in a household of strong Italian Catholic women who taught me that you air disagreements like that in private," Conway said.

George isn't the only one in the Conway household who isn't a fan of the president either. The couple's 15-year-old daughter, Claudia, recently gained a large social-media following for her anti-Trump posts. 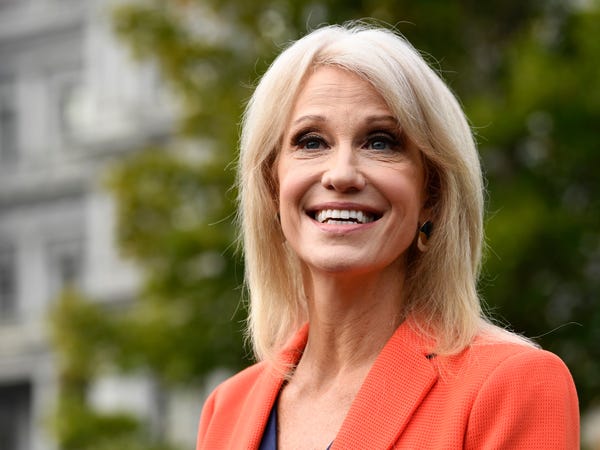 Claudia told Insider's Connor Perrett in June that growing up in a conservative household, it took a lot of time to educate herself and figure out her own political beliefs. Now she identifies as a liberal.

"We do get into arguments a lot — I'm not going to lie," she said about her family dynamic. "My mom is my best friend but we do fight all the time over politics, and I'm always shut down by my entire family."

Hayley Bieber "strongly disagreed" with her father Stephen Baldwin's support of Donald Trump in the 2016 election, according to a 2018 interview with The Times of London. 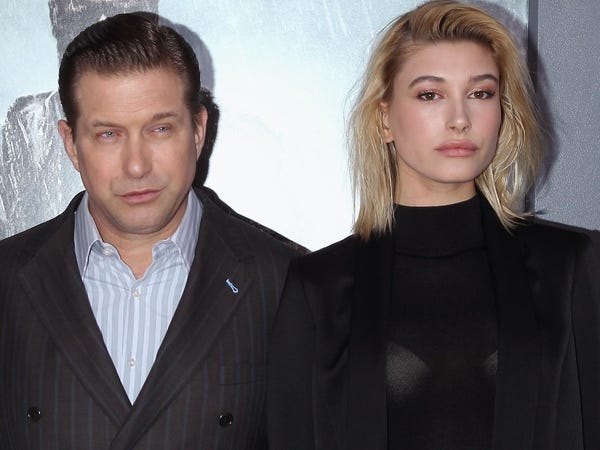 Hailey Baldwin — as she was called at the time before her marriage to Justin Bieber, told The Times of London in May 2018: "I love my father, he's an amazing dad, but we so strongly disagreed on [the election] … We don't talk about it now. It's not worth the argument."

In an earlier interview with the newspaper, in March 2017, Hailey had said that while she and her father disagreed on politics, she wasn't letting it impact their relationship.

"We didn't see eye to eye. It was a very big issue for me, but my dad's still my dad. I would never let politics get in the way of family," she said.

Stephen Baldwin's support for Trump was also at odds with two of his other brothers, Alec and Billy. 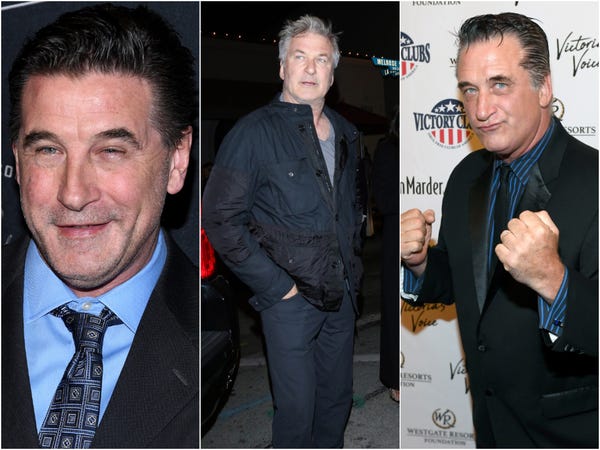 Billy Baldwin once accused Trump on Twitter of showing up uninvited at his wife's hotel room and trying to hit on her.

He also called out his brother on the social network, tweeting at Stephen in 2016 that if their father were alive "he'd smack you in the side of the head for supporting Donald Trump," according to Fox News.

Alec Baldwin has famously skewered Trump with his portrayal on "Saturday Night Live," as well as gotten into Twitter fights with the president off stage.

During an appearance on Fox & Friends in April 2017, Stephen revealed that he hadn't spoken to Alec since the 2016 election.

The opinions of the fourth Baldwin brother, Daniel, are more complex. He never publicly voiced support for either candidate during the 2016 presidential election, but after Trump won, he told TMZ that he disagreed with people staging protests over Trump's win.

However, Daniel and Alec made fun of the president during a segment on Daniel's radio show in Syracuse, New York, in 2018, according to Syracuse.com.

Before entering the 2020 presidential race himself, Kanye West supported Trump, but his wife, Kim Kardashian, voted for Hillary Clinton in 2016. The couple also have different views on childhood vaccinations. 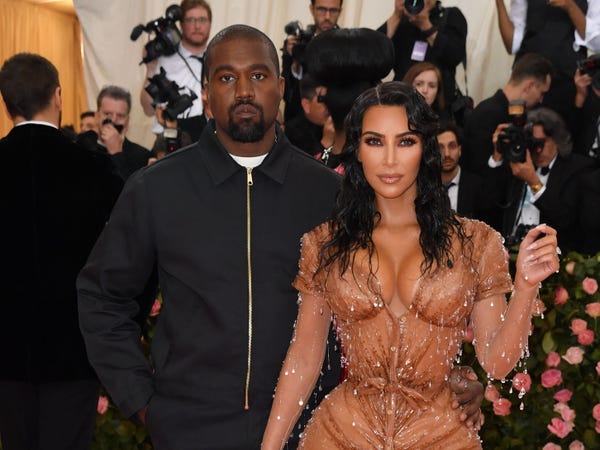 West told Forbes that he was "extremely cautious" when it came to vaccinations because "so many of our children that are being vaccinated" are becoming "paralyzed."

But his wife has been outspoken for vaccinations, and has taken her kids to get the whooping cough vaccine during an episode of "Keeping up With the Kardashians."

During his first campaign event, West also talked about his late-in-life change of heart on abortions, saying he no longer believed in them.

While Kim appears not to have spoken publicly about her feelings on the abortion debate, she has been an ardent supporter of Planned Parenthood, a women's health organization that also provides abortions.

Former Vice President Dick Cheney's daughters, Liz and Mary, had a publicly falling out in 2013 over the issue of same-sex marriage. 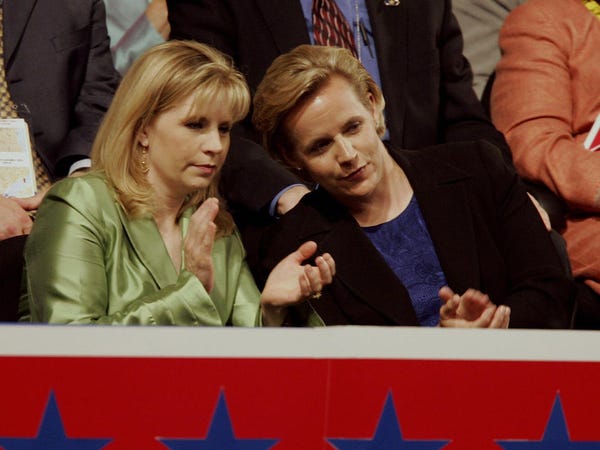 While running for the US Senate in 2013, Liz Cheney said she believed in the "traditional" definition of marriage.

This promprtedher sister, Mary, to writein a Facebook post that Liz was "just wrong" and "on the wrong side of history," according to Fox News.

Mary Cheney married her wife Heather Poe in 2012 in Washington, DC, two years after it became legal in the district. Three years later, a Supreme Court ruling would make same-sex marriage legal across the country.

Exes Bruce Willis and Demi Moore may still be friends, but they differ when it comes to political parties. Willis is a Republican, while Moore is a Democrat. 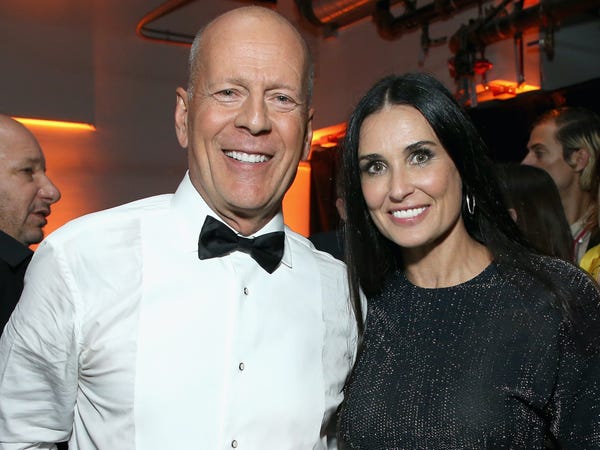 Demi Moore and Bruce Willis have remained friendly after divorcing in 2000, even recently spent lockdown together with their children.

But the two support different parties.

Willis is a Republican who supported George W. Bush in the 2000 election, while Moore campaigned for Barack Obama, according to The Hollywood Reporter.

Jennifer Lopez and Yankee legend Alex Rodriguez are joining families after getting engaged last year, but they appear to disagree on politics, with Lopez donating to Democrats in the past and Rodriguez supporting Republicans. 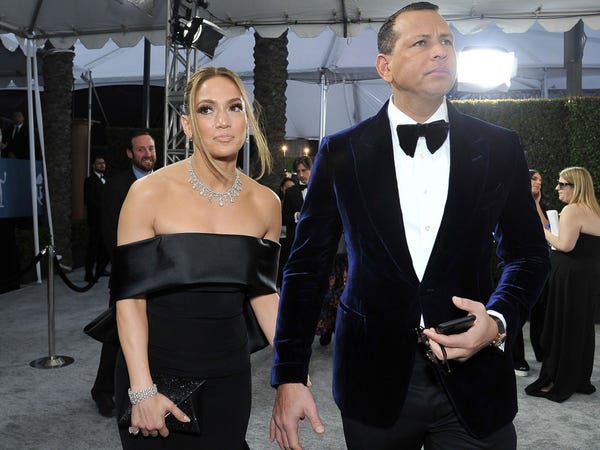 According to the Washington Examiner, Rodriguez donated nearly $10,000 to Republican presidential hopefuls John McCain and Rudy Giuliani, though CBS Sports reports that he did contribute to Hillary Clinton in the last race.

Lopez was also outspoken against the Trump administration's detaining of migrant children, according to DailyMail.com.

Actor Jon Voight is one of Trump's biggest supporters in Hollywood, but has said in the past that he doesn't bring up politics with his daughter, Angelina Jolie. 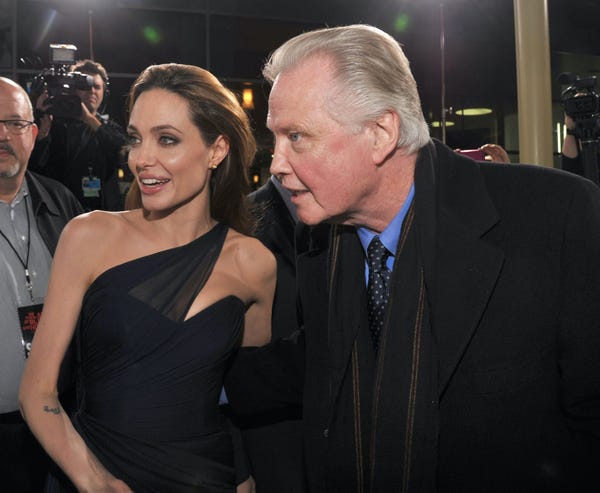 Voight told ABC Action News in 2012 his daughter was a "pretty smart gal," but that they "don't talk politics" because he doesn't "want to lecture."

Jolie has never endorsed a candidate, but her political leanings appear liberal from her comments in the past.

At the October 2019 premier for "Maleficent: Mistress of Evil," Jolie was asked to give her thoughts on Trump's impeachment inquiry.

"I really didn't want to speak politics tonight but we live in a country of laws and we have to have those laws," she said, adding that she didn't think her opinion mattered on the subject.

"I have to trust that that will play itself out," Jolie told ET Canada.

Voight, who also attended the premiere, said he believed there were "lots of lies … being presented as news."

"I can't really sit by. People know I'm for President Trump and they expect me to respond when I see something go seriously amiss," Voight said.

Two of Trump's children, Eric and Ivanka, were registered Democrats even while their father was running for president as a Republican in 2016. 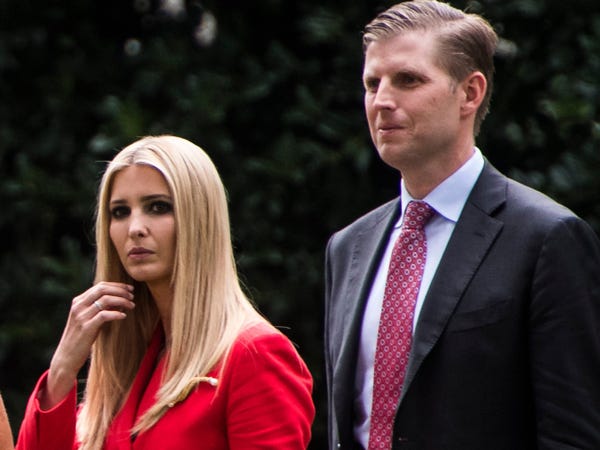 They didn't change their registration in time to vote for their father in New York's April 2016 presidential primary, The Washington Post reported.

Both have also donated money to Democrats in the past, according to Snopes.

Ivanka Trump and her husband, Jared Kushner, now work as senior advisers at the White House.

Trump's niece, Mary Trump, recently wrote a book about their "toxic" family, in which she detailed how she voted for Hillary in 2016 and disagreed with her uncle's "racist" Muslim ban. 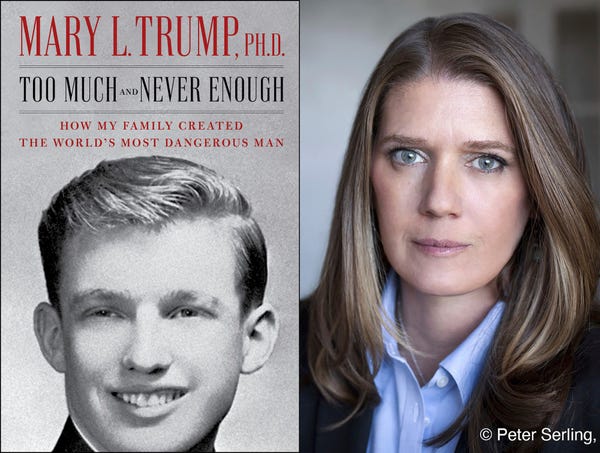 Read more: 5 of the most shocking claims in Mary Trump's scathing tell-all book about the president

Political consultants James Carville and Mary Matalin have been happily married for nearly 27 years, despite Carville being a Democrat and Matalin a Republican. 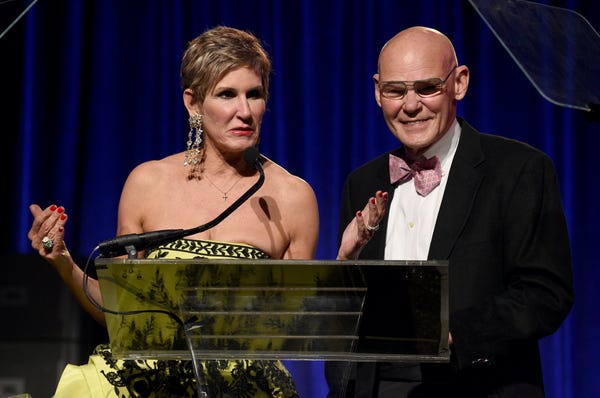 In a 2014 interview with CBS This Morning, the couple detailed how they met and fell in love in 1991, a year before they went off to work on different sides of the 1992 presidential election.

While Carville's candidate, Bill Clinton, won, the two continued their romance and were married in 1993. They have two daughters.