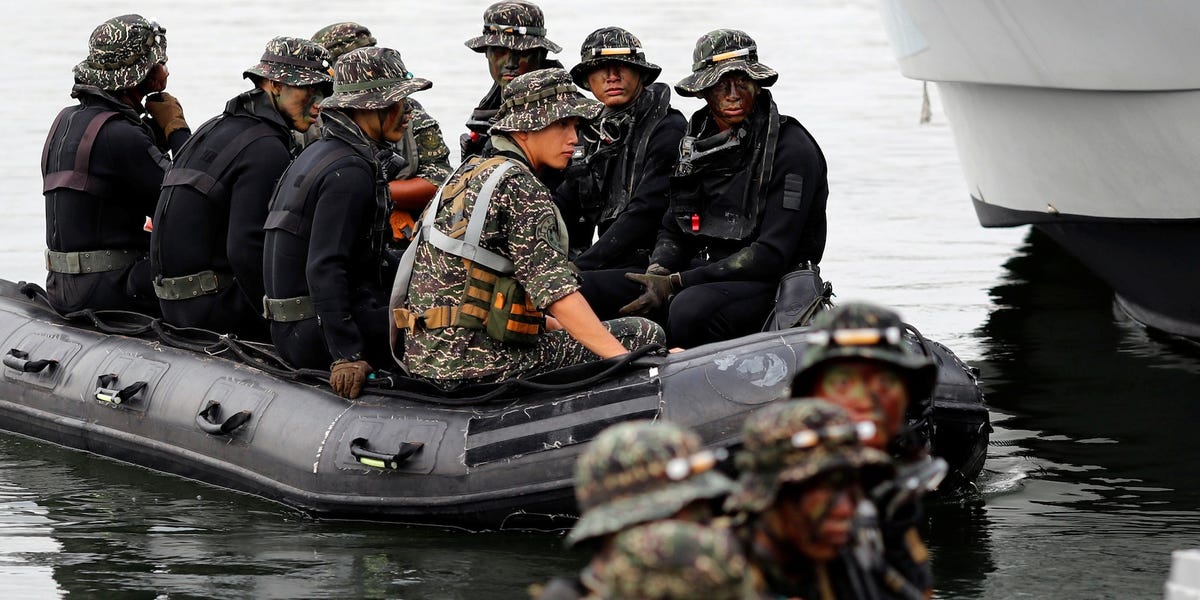 Taiwan's military has sent a marine company to reinforce the garrison on a small outpost in the South China Sea amid reports that the People's Liberation Army was planning a simulated attack on the islets.

A military source, speaking on condition of anonymity, said the navy had sent a company of around 200 marines to reinforce the coastguards stationed on the Pratas Islands, which are known as the Dongsha Islands in Chinese.

"The marines left for the Pratas about a week ago and will remain there on a short-term rather than a long-term basis," the source said, adding the posting was in line with the military's off-site training operations.

In May, Japan's Kyodo News reported that the PLA was planning to conduct a large-scale training exercise on Hainan island this month, which would include a simulated takeover of the Taiwanese-controlled islets.

It said the beach landing exercise, to be carried out by the PLA's Southern Theatre Command, would be on an unprecedented scale and would involve large numbers of marines, landing ships, hovercraft, and helicopters.

The Pratas Islands, consisting of one island, two coral reefs, and two banks, is located about 445km (275 miles) from Taiwan's southern port city of Kaohsiung and just over 300 km from the Chinese mainland.

The area has been designated a national park because of its coral reefs and seagrass bed ecosystem and has no permanent civilian residents, only a coastguard garrison of roughly the same size as the detachment of marines sent to reinforce them.

Taiwan's defence ministry declined to confirm the Kyodo report, but Chief of Joint Operations Lin Wen-huang emphasised in May that the military would continue to strengthen combat readiness and ensure proper preparations on Taiwan's outlying islands, including the Pratas Islands and Taiping Island.

Taiping is the largest of the Spratly chain, where mainland China, the Philippines, Malaysia, Vietnam and Brunei all have competing claims.

On Tuesday Wang Ting-yu, a legislator from the governing Democratic Progressive Party, said some marines had already arrived on the Pratas Islands by some point in June.

Wang, who sits on the foreign and defence committee, did not specify the size of this detachment but stressed they had all "received special training from the US and are capable of carrying out anti-landing and anti-parachute operations against the enemy."

Wang said Taiwan normally only stationed coastguards instead of regular troops there to ease tensions in the South China Sea.

"The US used to condemn Taiwan if we posted the military on the Pratas and Taiping," Wang said, adding that Vietnam and other claimants would also complain.

"But this time there has been no objection over our posting marines there because they all want to contain China's military expansion in the region," Wang noted.

Beijing considers Taiwan a wayward province that must be returned to the mainland fold, by force if necessary. It has suspended official exchanges with Taiwan since Tsai Ing-wen of the independence-leaning DPP was elected president in 2016 and refused to accept the one-China principle.

In recent years it has stepped up its attempts to intimidate Taiwan by staging war games close to the island and has poached seven of Taiwan's dwindling band of allies to try to force Tsai to accept the one-China principle. It also been expanding its presence in the South China Sea, building up its military infrastructure on the Spratly and Paracel islands.

But at the same time, the US has also been increasing its presence in the area to counter China's expansion, carrying out carrier strike group drills and more than 50 sorties by ships and planes this year.