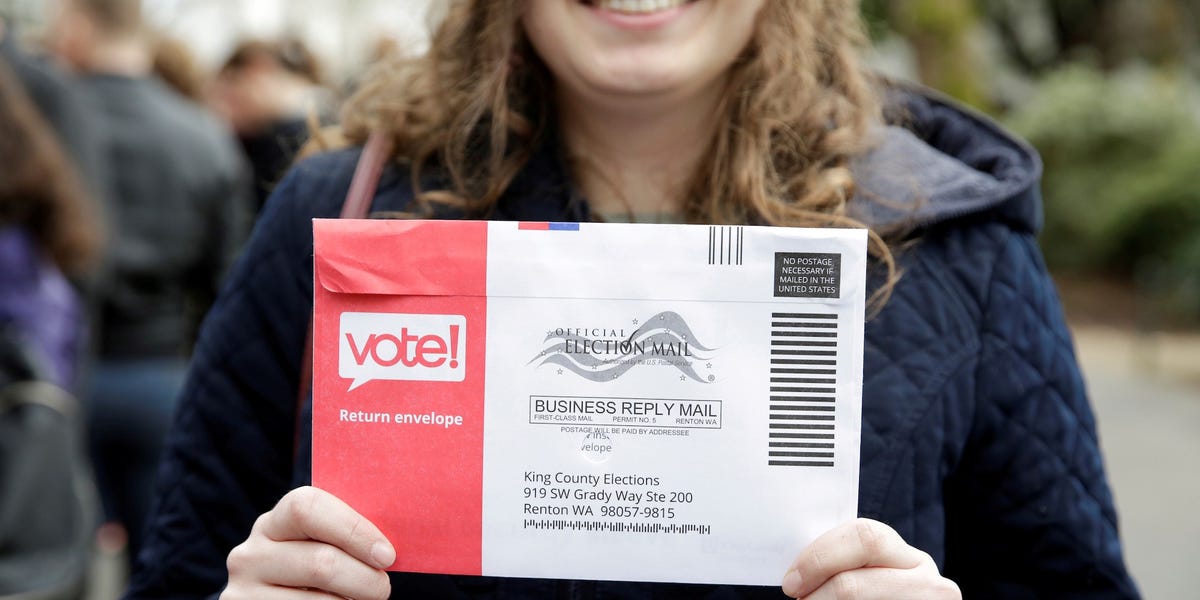 Last weekend, we passed a milestone moment in the 2020 election cycle: We are now less than 100 days away from Tuesday, November 3 — Election Day. In normal years, this would be the time when the general public really starts tuning in to the messages both parties are running with, familiarizing themselves with the candidates, and deciding who gets their vote.

But just as it has with every other aspect of our lives, the coronavirus pandemic has thrown everything we know about politics into disarray. It's possible that voters, already familiar with Biden from his years as Obama's vice president and well aware of President Trump's COVID-19 response, have already made up their minds. Or it's equally possible that the electorate will be rocked by a series of surprises that will change the foundations of the race between now and November.

Two things we do know for sure as we head into the home stretch of this never-ending presidential campaign season: first, people need to vote on Election Day; and second, coronavirus won't disappear between now and then. Just as an economy is stronger when more people participate in it, a democracy is stronger when more people's voices are heard. So how can we ensure that the people are heard, at a time when simply going into a busy public space is dangerous?

In this week's episode of Pitchfork Economics, Civic Ventures President Zach Silk teams up with veteran political strategist Cristina Uribe to answer listener questions about the election. Unsurprisingly, vote-by-mail is a major topic of conversation.

When it comes to risk of coronavirus infection, vote-by-mail is the safest available option. If you can walk to your mailbox and back twice without encountering unmasked strangers, your entire voting experience is virtually guaranteed to be COVID-free. It's also easy, trackable, and transparent.

My home state of Washington has been vote-by-mail for over a decade — it became a legally required option for all counties in the state in April of 2005, and was quickly adopted statewide once voters got used to the ease and the convenience of the system. Though I used to love going to the polls, the process of voting by mail is so stress-free that I can't imagine going back. I can research candidates and initiatives as I vote, and then I can check the progress of my ballot online as it arrives at the counting facility, my signature is confirmed, and my vote is cleared to be counted.

So why wouldn't every state adopt a vote-by-mail system this year?

"First and foremost, let's be very clear that this is a problem perpetrated by one particular party, which is really the Senate Republicans" working under President Trump's direction, Silk explains.

For months, Trump has cast doubt on the reliability of mail-in ballots, presumably in an effort to throw the legitimacy of a potential Biden win into question. But "as much as Trump wants to make vote-by-mail a partisan issue, in most of the country it's not a partisan issue," Silk adds. Several red states, including Utah, have robust vote-by-mail systems, he explains, and he points out that the two demographics that have traditionally embraced voting by mail, "old people and the military, are two very strong Republican voting blocs. This shouldn't be partisan. We should be able to figure this out."

In fact, Silk says, some states are in the process of establishing safe voting systems right now. "Ohio is doing interesting things [to promote voting by mail], and Iowa is going to mail applications to everyone in the state" to encourage mail-in ballots.

Silk, a veteran campaign manager and political strategist, admits that Republican interference in elections is "the one thing that keeps me up at night about this election, the one that makes me the most nervous — the inability of people to participate."

Uribe agrees that "we should enfranchise as many people as possible and make it as safe as possible for everyone" to vote, but she adds that "vote-by-mail is also not a panacea for this election."

Even in states like Washington that have fully embraced vote-by-mail, she points out, "it doesn't happen overnight. Places that have done it didn't institute it in one election, and they didn't do it in less than 100 days."

And worse, "for indigenous and native communities, vote-by-mail presents tons of problems as it relates to having addresses versus P.O. boxes" on reservations. Post office boxes — which may be shared among many people — present a huge problem for mailed ballots, which also leaves many unhoused individuals without a secure way to vote.

Still, vote-by-mail is by far the most reliable voting system, and it's worked in both blue and red states. But no system is entirely secure. Without serious, nonpartisan oversight, it's possible for Republicans to disenfranchise young people and people of color from voting by mail. Ballots from Republican strongholds with high densities of traditionally Democratic-voting populations, for example, are likely to see more signature challenges and larger rejection rates.

And Trump's continual assault on the system means that the American people will have to be especially vigilant against vote-tampering this year.  Some experts believe that if partisan saboteurs were to commit an all-out assault on vote-by-mail results, "we can lose up to a five-percent election margin based on rejection rates of certain ballots — and that five percent is something we can't afford to lose," Uribe said. That's why she believes that we need a more diverse selection of volunteer poll workers, as a safeguard against disenfranchisement.

It's easy to fall into the lazy trap of believing that voting is a once-a-year, or even a once-every-four-years, responsibility. But civic engagement demands more from us — particularly in a time when democratic institutions are under attack.

"If you're looking to take near-term action" to promote voting by mail, Silk said, "you should be reaching out to your lawmakers — especially if you have a Republican Senator in your state — to communicate with them how crucial it is to protect the vote."

In other words, if you want your voice to be heard in November, you've also got to use your voice right now.