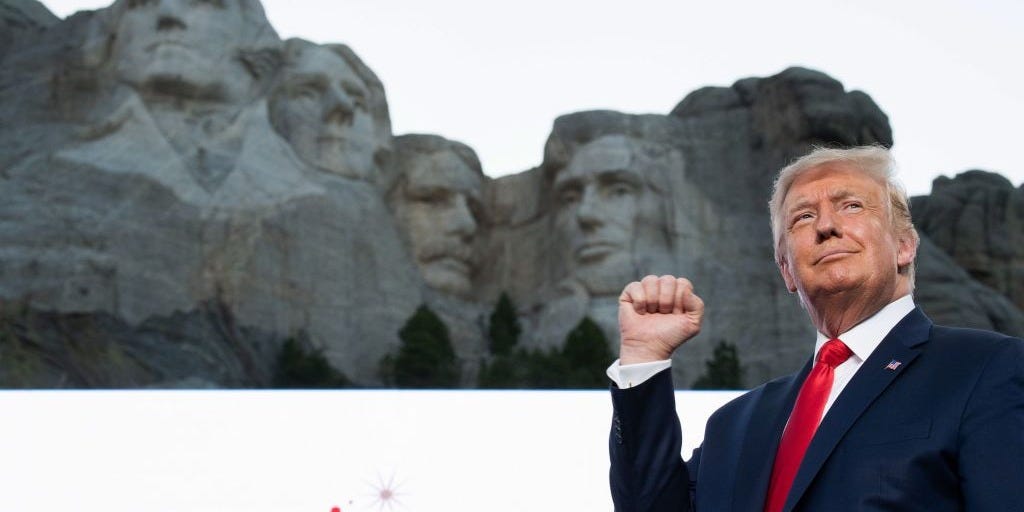 President Donald Trump announced on Friday that his administration will create a "National Garden of American Heroes" to honor iconic Americans through history as the US grapples with removing and renaming Confederate monuments and symbols across the country.

During his remarks at the base of South Dakota's Mount Rushmore ahead of Independence Day, Trump railed against what he called "far-left fascism" at play in anti-racism protests that have demanded US cities remove monuments and symbols of their Confederate ties. Trump said they were looking to "overthrow the American Revolution" and to "end America."

The executive order repeated Trump's disapproval of cities and institutions that have toppled or are considering removing offensive historical symbols.

"My Administration will not abide an assault on our collective national memory," the executive order read. "In the face of such acts of destruction, it is our responsibility as Americans to stand strong against this violence, and to peacefully transmit our great national story to future generations through newly commissioned monuments to American heroes."

The new series of lifelike statues will contain the likenesses of at least 31 Americans including civil-rights figures, Founding Fathers, and military heroes "who have contributed positively to America throughout our history."

"None will have lived perfect lives, but all will be worth honoring, remembering, and studying," the order said.

The executive order established a task force that will be provided with funding and resources from the Department of the Interior. The task force has 60 days to submit a report including proposals for the garden's location.

The National Garden is set to be open to the public by July 4, 2026, according to the White House.

Though Confederate symbols are not a new target for protestors and civil-rights advocates, George Floyd's May 25 death in police custody sparked some of the largest protests ever seen in the US, which have earned Trump's ire through demanding changes to monuments, flags, and military bases.

Trump has rejected any possibility of changing the names of military bases honoring Confederate generals, and threatened anyone who vandalizes a statue in the US with 10 years in prison.

However, discussions over preserving ties to the Confederacy have sparked long-awaited changes in local fixtures like Mississippi changing its state flag.